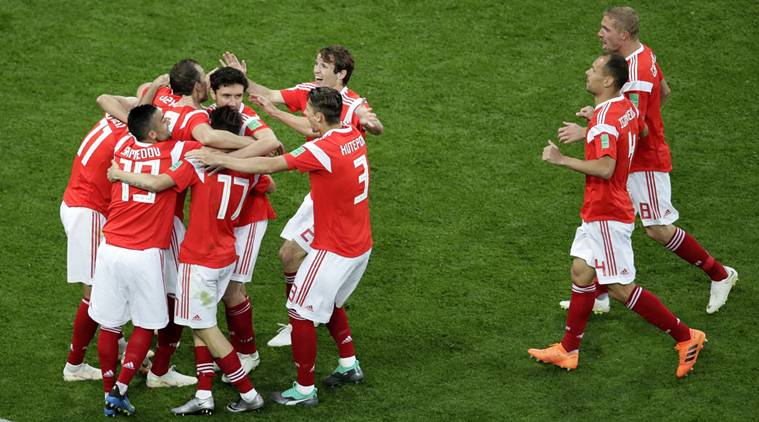 
”Are they good, or are they just lucky?” This is the question that everyone is asking themselves about the 2018 FIFA World Cup host nation – Russia. After beating Saudi Arabia 5-0 in the opening fixture, they recorded another win yesterday, beating Egypt 3-1 and almost solidifying a spot in the knockout stage.

They were slight favourites coming into this game but would’ve been extremely nervous when they heard news of Egypt’s Mohamed Salah being declared fit to play in this game. The 26-year old forward has had a sensational year for Liverpool in the Premier League and was one of the main reasons they reached the Champions League finals too.

At the end of the first half, both teams had a few chances on goal, but the scoring wasn’t opened yet. It was a couple of minutes after the start of the second half that Russia went ahead, thanks to an own goal from Egypt’s Ahmed Fathy, who was trying to do away with a shot towards goal, but only managed to deflect it past his own keeper.

Denis Cheryshev was the next to join the party, scoring a goal in the 59th minute of the game and putting Russia 2-0 ahead. Cheryshev was a favourite to strike for the hosts after two goals he scored in the opening game. 8 minutes later, Russia struck again as Artem Dzyuba put Russia 3-0 ahead and the Egyptian shoulders started drooping.

Three goals were witnessed within the space of 14 minutes as Salah got himself a penalty in the 73rd minute, after being brought down by a Russian defender in the box. After the season he’s been having, a penalty was the least of his worries as he pulled one back for his country. However, it was too late, and Russia eventually won 3-1, almost ending Egypt’s chances of going ahead. Watch the full highlights package here: