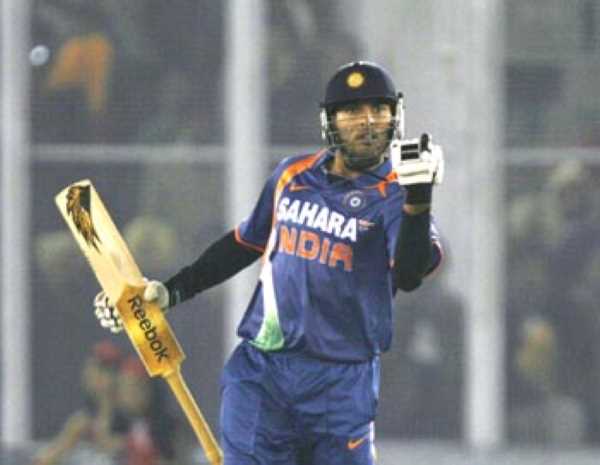 
It was 12th December 2009, India was playing the 2nd T20 against Sri Lanka in Mohali. It was a day-night fixture. No one was aware that we were about to witness world record run chase in a T20I.Both the captains came for the toss proceedings, Sri Lanka won the toss, and elected to bat first on a pitch that offered some assistance to the bowlers.

Nehra opened the bowling attack for India while Dilshan and Jayasuriya opened for Sri Lanka.Nehra was thrashed for 10 runs in the first over of the match itself but soon Dilshan fell prey to Ishant Sharma on the 2nd ball of the 2nd over of the match.

Kumar Sangakkara came in to bat at no.3 and started thrashing the bowlers to every corner of the field along with Jayasuriya. At the end of 5 overs, the score was 61/1. Jayasuriya lost his wicket in the 8th over to Yusuf Pathan, but he had already done enough damage. Sangakkara kept on milking runs from the Indian bowlers but soon on the last delivery of 11th over he got out as Nehra pulled off a good catch and credited Yuvraj Singh with a wicket to his name. Sangakkara scored 59 runs off 31 balls comprising of 8 boundaries and 2 sixes. The score was 121/3 at the end of 11 overs.

As the top 3 lost their wickets, Indian bowlers broke the middle order of Sri Lanka but the damage was already done as at the end of 20 overs Sri Lanka had scored 206 runs at the loss of 7 wickets. India had a big task at hand as chasing down 207 runs with a required run rate of 10.35 per over is not an easy task.

Gambhir and Sehwag came to the crease with a mammoth total to be chased and Gambhir took the strike. Weeraratne was opening the bowling for Sri Lanka.Sehwag was in no mood to waste time and started bashing the Sri Lankan bowlers while Gambhir played second fiddle. Gambhir lost his wicket in the 6th over and Dhoni came in to bat. The fans were surprised as Dhoni promoted himself to bat at no.3 as opposed to his usual batting position lower down the order.

Sehwag smashed a 27 ball half century and by the end of 10 overs, India were 104/1.Now as the half innings ended India had to chase another 103 from the remaining 10 overs.Malinga claimed Sehwag’s wicket at the end of 11th over. A great knock came to an end. The audience gave a standing ovation for his 64 runs scored off 36 balls.

Yuvraj Singh came in to bat next with 9 overs remaining to chase the target. Yuvraj was quite in some form that day as he was scoring runs too easily with clean hits all over the ground. Yuvraj and Dhoni weaved a partnership of 80 runs in 36 balls before the latter got out at the end of 17th over. The major task was done with only 19 runs required off 18 balls.

With just 2 runs required off the last over and Yuvraj on strike, the crowd was on their toes. Yuvraj sealed the match by hitting a six off the first ball of the last over and a world record run chase in a T20 international match was recorded in Mohali on 12th December 2009.Yuvraj Singh was awarded the man of the match award for his economical bowling and quick-fire knock of 60 runs off 45 balls, a birthday gift he won’t forget! Here’s the link to a quick review of the very special match. Also, keep reading GutshotMagazine.com for more ‘Cricket Gyaan’ articles.