Two of the biggest poker players of all times clashed in a series of heads-up matches for High Stakes Duel on the PokerGo streaming service. The first showdown pitted Phil Hellmuth against Antonio Esfandiari.

The series follows a format where a pair of players each post a $50,000 buy-in to play an initial match for $100,000. The loser from each round has the right to challenge the winner to a rematch for double the stakes, with the opportunity then passing to any other potential challenger willing to step in at the new stakes if the loser of the first round declines to challenge.

According to the format, the stakes double for each round, which would result in a final match for $12.8 million if any player ever makes it to the eighth round of this challenge. A victorious player from round 1 can not cash out their winnings until they’ve won three straight matches prior to round 6, or two in a row from the fifth round on. 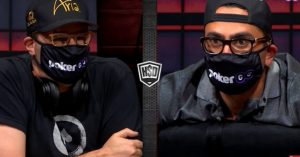 Hellmuth came out on top against Esfandiari in round 1 back in late July. Esfandiari immediately challenged Hellmuth and the two weren’t able to play until late September. The hand began with Esfandiari holding just over a 2:1 lead. Beginning with 8

, the 15-time World Series of Poker bracelet winner called 600 more from the big blind with A

and the flop came down to J

. This went on until Hellmuth three-bet to 29,000, and Esfandiari decided to make the call. Esfandiari announced that he was all-in, putting Hellmuth at risk for his last 34,825. Hellmuth made the call to reverse their chip positions.

Both players fought for a win, but a flush-over-flush cooler gave Hellmuth a 3:1 lead that turned out to be decisive. Lastly, Esfandiari made the call, and ran into a superior flush. Hellmuth’s stack grew to 297,000 while Esfandiari slipped to 103,000. In the end, Hellmuth made the call and earned the pot for $400,000. With Hellmuth deciding to bank his winnings, the next High Stakes Duel will begin with two new players battling it out for $100,000 in the first round.