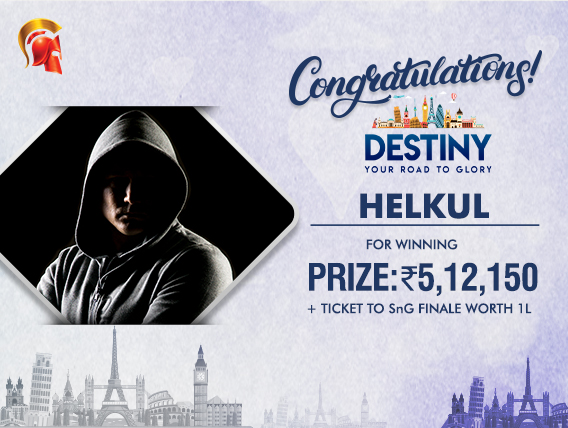 
We recently reached the end of a 10-week long season of Destiny 5.0 on The Spartan Poker, where ten winners from every Wednesday played out the Destiny 5.0 SnG Finale on 19th August, and Nitin Arora walked away with the mega prize – an INR 10 lakh package trip to Europe.

That’s the specialty of the Destiny tournament series and Spartan is back with the sixth edition of the series, with the first tournament taking place last night. The Destiny 6.0 INR 20 Lakh GTD tournament began at 7:30pm last evening and it took 8 hours and 34 minutes before a winner was declared.

The tournament had a buy-in of INR 5,500 and a massive field of 462 entries meant a new prize pool of INR 23.1 lakh was generated, with the top 40 players being paid out a minimum of INR 13,860. The player who ultimately moved one step closer to writing his own destiny and winnig a package trip to play poker in Europe was ‘helkul’, who outlasted this field and took home the top prize of INR 5,12,150, in addition to an INR 1 lakh ticket to the Destiny SnG Finale.

In the final hand, helkul played his pocket Kings coolly, making a small raise pre-flop and then calling Manashnayak’s all-in, who had Kh 6h. The flop 2h 3d 6c gave Manashnayak top pair on the board, but 2c on the turn and 8h on the river didn’t help him improvise, as helkul won with Kings and Deuces, which was better than his opponent’s Sixes and Deuces.

Keep reading GutshotMagazine.com for more updates on the biggest poker tournaments from India and around the world.