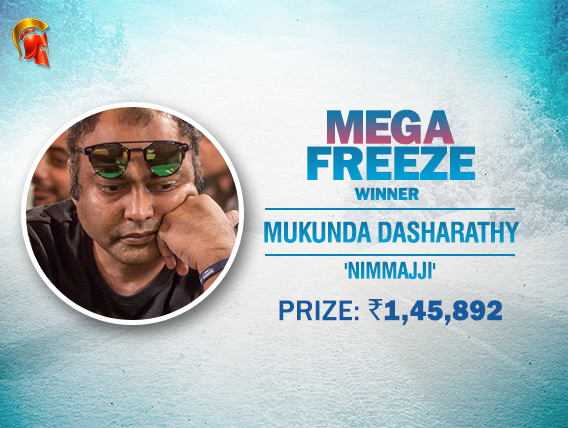 Players stay away from the unnecessary shoving of stacks in the early stages of the tournament and thus, patience is key. The Mega Freeze has a buy-in of INR 5,500 and it takes place every Monday at 7:30pm on Spartan. The tournament was contested yesterday too, attracting a field of 540 entries in all.

The guarantee was slightly missed last night and as the tournaments progressed the top 40 were paid out a minimum cash prize of INR 10,800 each. The tournament ended at 12:21am this morning, wrapping up a grind of nearly five hours and by this time, it was Mukunda Dasharathy aka ‘NIMMAJJI’ who took home all honours.

It was a deal in heads-up that saw the end of the tournament and a small deduction in what the original winner would’ve got, but players would’ve wanted to secure themselves from the second-place pay drop, which led to agreeing on this deal. NIMMAJJI was ahead in chips at the time and thus, walked away with INR 1,45,892 for first-place.

It was Level #34 of the tournament when they decided to put an end to it, with the blinds running at 3,000/6,000 – 600. ‘Jhonnymaddog’ raised pre-flop and Dasharathy folded before the deal was made and the former took away a prize of INR 1,13,008 for finishing second.

Now for Dasharathy, it was consecutive online victories in two nights as he won the Mega Suits just a day prior on Adda52, making considerable bankroll additions in the last couple of days. We caught up with the player after he took down Spartan’s Mega Freeze last night and asked him about the experience.

He said, “I like freezeout tournaments, the only down side of course being the total prize money. In freezeout tournaments, I am more cautious, and range bound in my hand selection. Yesterday was no different. During the start of the tournament I was card dead and hardly played any hands. Over the course of the tournament I was able to pick up some good spots and maintain my stack just around average. I was very aggressive when we were nearing the bubble and was able to pick up some chips, I moved close to the top 3 stacks when I had 99 and the chip leader tried to bluff me all 3 streets. I moved into the final with top 4 stacks. With 6 or 5 people left, I jumped into chip lead by slow playing my KK. After this, I was able to dominate the table completely.”