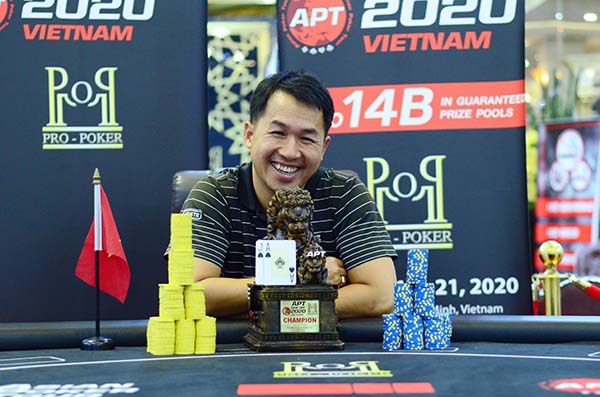 
It all began on 10 January when the 2020 edition of APT Vietnam Kickoff Event took to the casino floor of the Pro Poker Club in Ho Chi Minh becoming a major attraction from the past few years now. Comprising of two key tournaments the Main Event and the VND 6 billion GTD Championships Event. And yesterday after 177 hands, the second featured tournament crowned the native player Harry Duong the latest champ earning VND 1.33 billion in prize money!

A total of 160 runners took to the tables after paying VND 38,500,000 buy-in yet the event observed an overlay as the prize pool touched VND 5,820,000 and eventually was shared among the top 16 finishers earning min-cash VND 77,890. Bringing the largest stack and leading the final table was Poland’s Michal Polchlopek. And the top bigger cuts from the prize pool were claimed yesterday.

The final race began observing the first casualty David Erquiaga earning VND 193,820,000 following next was Nguyen Thanh Binh with As Qh, unable to dominate Duong’s Ah Ac. China’s Peng Yang tripled up earlier and still went down in the 6th place. With the fall of Polchlopek in the 3rd heads-up got underway between Vietnamese duo Duong with 6:1 lead up against Terry Tien Thanh Nguyen.

By heads-up hand #40, the tournament wrapped up. Duong with As Js and Terry with Ad 2d, the board bricked and that’s when Duong secured his career second APT Championship title, further boosting his live earnings from $230,113. The winner was last recorded to take down 2018 APT Philippines Head-Hunter and earning his career-best back in July 2014 in APPT Manila Main Event.

The five-day-long marathon caught the attention of Indian poker pros, countrymates Sumit Sapra and Dhaval Mudgal went down on Day 2 itself while Meherzad Munsaf continued to battle on Day 3 and finishing in 14th place earning VND 93,470,000 (~INR 2.86 Lakhs)!

Keep reading GutshotMagazine.com for timely APT Vietnam Kickoff updates, results as well as general poker news from around the world.