Poker has been a part of  the Indian culture since years altogether. There are thousands of common and uncommon poker slang terms, which we use while playing poker. The sport has its own language and learning the poker vocabulary will greatly improve your knowledge of the game. We’re building a bank of our own poker terms and you can check them all out here.

Today, let’s take a look at Sandbagging. It is a specific type of play where a player attempts to maximize expectation by deceiving your opponent. In simpler words, it is slow playing, making it look like your cards are weak when they are actually strong. This is done by checking and calling with a hand that would normally bet and raise with. By this opponents are tricked into believing you have a weaker hand and try to raise the pot. After which, you quickly change course and re-raise. Sandbagging works best against aggressive players because you need someone to build the pot for you. 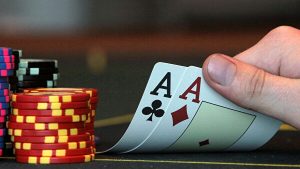 If a player has two aces against a flop with a king, jack, and seven, they might bet weakly as if they had bad hand in the hopes that an opponent with a king will take the bait and raise aggressively. If that did happen, the sandbagging player could continue to slow play the hand by only calling the opponent’s raise even though they could re-raise with little fear of losing the hand. By sandbagging the hand the player stands to make more than if they bet their aces aggressively and forced everybody else to fold early.

Sandbagging can be considered in other games as well such as golf, racing, wrestling and even business. In sports, it can be considered as deliberately fooling the opponent into accepting higher bets or qualifying slower in races than what the car can actually perform. While in business, someone who hides a deal or pushes out close dates to limit expectations on the company or an individual in order to then exceed anticipated results.

Some players constantly sandbag and by using it continuously, the tactic could lose its effectiveness.  In other words, if you sandbag too frequently, the other players will stop betting your hand for you. You will end up receiving fewer and fewer check raise opportunities. It is just one out of hundreds of poker terms already available, so if you are a beginner and looking forward to diving deep into the sport, keep an eye on GutshotMagazine.com

How to play and win at blackjack ?