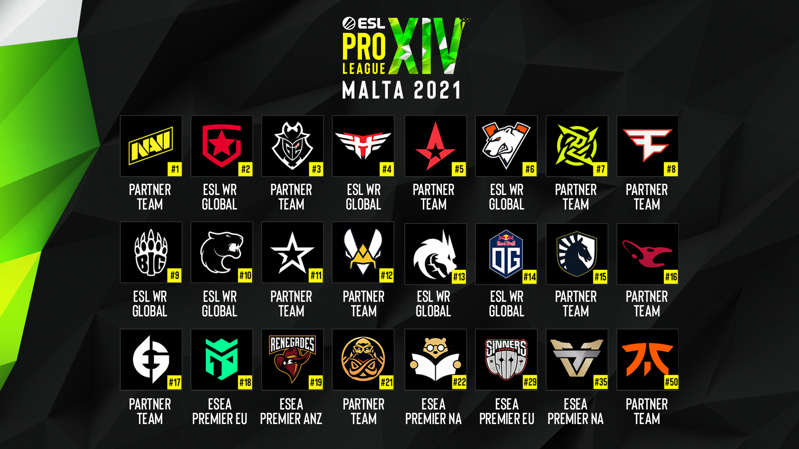 Groups For The 14th Season Of The ESL Pro League Announced


The groups for what might be the last CS:GO tournament of the Intel Grand Slam’s third season, have been revealed. This comes days after the list of 24 teams for ESL Pro League Season 14 were unveiled.

The month-long competition begins with four groups of six teams playing in a round-robin style, one after the other. Each group’s top three teams advance to the playoffs, with the top club in each receiving a quarterfinal or semifinal bye.

The following are the four groups, along with their respective dates.

Several ESL Pro League Season 14 teams are barely over a month removed from participating at IEM Cologne, with mixed results impacting their momentum moving into their groups.

Na’Vi can take the Intel Grand Slam season three trophy and $1 million rewards with a victory at the Pro League after his triumph at IEM Katowice, which was powered by an incredible simple  performance by even his standards.

Season three is now extended for almost two years due to more extensive diversity of event winners and COVID-19 cancelling numerous LANs in 2020, whereas previous Grand Slams were won in less than six months by Astralis and Liquid, respectively.

Since the completion of IEM Katowice, various teams have changed their line-ups. Complexity changed their coaching staff and replaced NA veteran RUSH with former Astralis/Cloud9 rifler es3tag. JW and Golden are now on the bench, and Fnatic’s starting line-up remains in jeopardy. Astralis went back to a six-man line-up and restored the sniping element that had been lacking with the arrival of Lucky, a new young AWPer.

With the ESL Pro League taking place online, some of the teams who established their name during CS:GO’s online mode phase hope to reclaim their supremacy. Gambit, Heroic, and BIG are all hoping for a good performance in this year’s ESL Pro League, with Heroic, in particular, looking to defend their title.

Season 14 of ESL will begin on August 16th, 2021. We don’t know what time the game will start, or which teams will play, but it will be two teams from Group A.