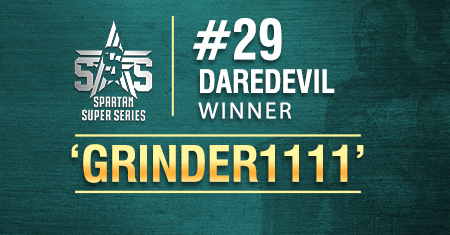 
Day 6 action at the Spartan Super Series (SSS) began with the Lite version of this DareDevil tournament being claimed by Siddarth ‘PeterPunter’ Singhvi who won his third title in two days. And it seems repeat title wins are the norm in this SSS taking place all through this week at The Spartan Poker. This time around it was SSS Event #17 winner ‘grinder1111’ who outlasted the field in this featured tournament of the day to claim his second title SSS Event 29: DareDevil.

The bigger version of the DareDevil features a buy-in of INR 5,500 and in case you get busted you get to re-enter at a 50% discount. 126 entries ponied up buy-ins to take the prizepool to INR 12,82,500 well past its original guarantee of 10 Lakhs. 15 players would end up sharing that prizepool with INR 24,367 being the min-cash assured to the money finishers. A couple of familiar names in Anurag ‘InvestmentBanker’ Srivastava, ‘Strangeplay’ and Arjanveer ‘instrumental’ Chadha were among those who cashed but they fell short of the top 3.

When action was down to 3-way, it was ‘Sidddhuu’ who was leading with just over 1.8 million chips. grinder1111 (6h 8h) knocked out ‘johnny89’ (Ts Qh) when he clipped a pair of Eights on a board of Ah 4d 8s 3h 7d. That hand helped grinder1111 cross the million chip mark but he was still 2:1 underdog going into heads-up. Sidddhu consolidated his stack over the next few hands going past the 2 million mark while grinder1111 dropped to 800k. That gap widened a bit more before the stack shifting happened. On Sidddhu’s (Jd Jc) raise, grinder1111 (7c Kh) moved all-in. Fortunately, the flop was a good one for him Kd 7s 6s 2s Ah giving Kings and Sevens and a 1.5 million pot to grinder1111.

That pot brought both player stacks to about even but more importantly it swung momentum towards grinder1111. Over the next few hands, he kept chipping away at his opponent’s stack till he was over 2 million as compared to Sidddhu’s 900k and then the final hand happened. Holding a pretty good Kd Qc, grinder1111 moved all-in pre-flop. Sidddhu decided to make the call with Ac 4d. Unfortunately there would no fairy tale comeback for Sidddhu as the board went 9d Ks Td 5d 6s giving him a pair of Kings and the win. For his efforts, grinder1111 won INR 3,59,100 while Sidddhu would have to settle for INR 2,34,056.

Keep your browser pointed to GutshotMagazine as we will shortly bring you roundups from the final two tournaments of the day.