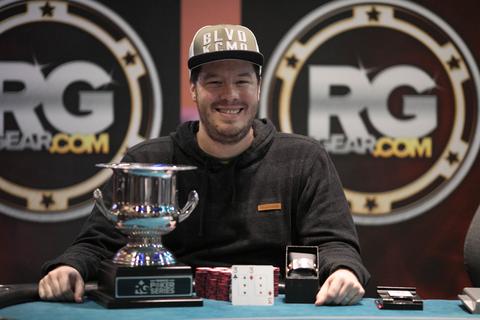 
WSOP bracelet winner and RunGood Ambassador Grant Hinkle emerged victorious in the  RunGood Poker Series Downstream Main Event for  $28,360 (INR 18.63 Lakhs). The Overland Park, Kansas, native triumphed over a field of 199 entrants to take home first-place after leveraging his chip lead to whittle down his heads-up opponent, then flopping a set of threes against his opponent’s pocket fours.

Hinkle joined the team in 2016, having a solid resume with $1,614,499 in lifetime tournament winnings. Still, Hinkle remains employed outside his poker career as a Governance Risk and Compliance Consultant.

Hinkle built his stack all at once toward the end of Day 1 after nursing his starting stack for the first 9 levels. He came into Day 2 second in chips with a stack of 221,000 chips, right behind the Day 1 chip leader and eventual second-place finisher Jesse Jones. He personally eliminated JD Hays, Matt Ellis, and Li Wu at the final table.

In the final hand with Jones, Hinkle held a commanding lead with over 3 million chips to Jesse Jones’s 600,000. With the blinds at 20,000/40,000, Jones limped on the button and Hinkle moved all in from the big blind. Jones immediately called for his remaining 560,000 chips. Hinkle tabled 3♦3♣ while Jones held 4♣4♦. Jones even had Hinkle’s suits covered. But drawing slim is not the same as drawing dead, as evidenced by the K♠9♠3♥ flop. Hinkle’s set would hold through the 7♥ turn and J♥ river to take it down.

Keep reading GutshotMagazine.com for more poker results and tips on how to play poker from time to time!