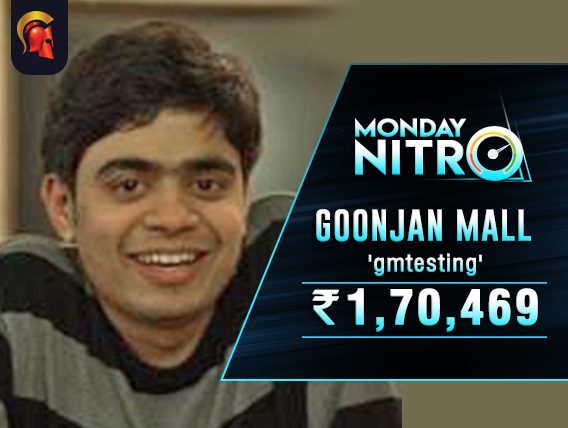 
Monday Nitro INR 8 Lakhs GTD, one of the newest offerings that was started by Spartan Poker a while ago, is a Monday feature tournament that replaced the previous Mega Freeze. Only 2 Monday Nitro tournaments have taken place till now and last night the 3rd was conducted.

The player to emerge victorious after a grind that lasted almost 6 hours, from 7.30 pm till 1.24 am, was Goonjan Mall aka ‘gmtesting’. Mall, fresh from winning Sunday Stacks the previous night, aced this one too yesterday and earned INR 1,70,469 as the first-place cash prize.

He beat ‘THEDONKKID’ in heads-up to secure his title and the top prize. The final hand of the tournament saw Mall with 7:1 chip lead and was sitting comfortably. THEDONKKID, with Jc Qs raised all-in before the flop. Mall called with Ks Kh. The board revealed 3c 9c 7d Qd 4d. THEDONKKID paired Queens but Mall’s Kings held good till the end. The runner-up got INR 1,14,774 as the cash prize.

Mall is a reputed community online player, having numerous online cashes from previous tournaments. His recent achievements include Spartan Mega Freeze win in February this year along with numerous titles to his name. He will be able to carry forward this trend in coming months, given his previous success.

Some regular grinders to rank in the money on Spartan last night were previous Destiny package winner ‘Tiger10’, Siddhanth Kapoor (26th), Ashit Sharma (27th), Neel Joshi (28th), and others. Keep reading GutshotMagazine.com for more such tournament updates, round-ups and for general poker news from around the world.