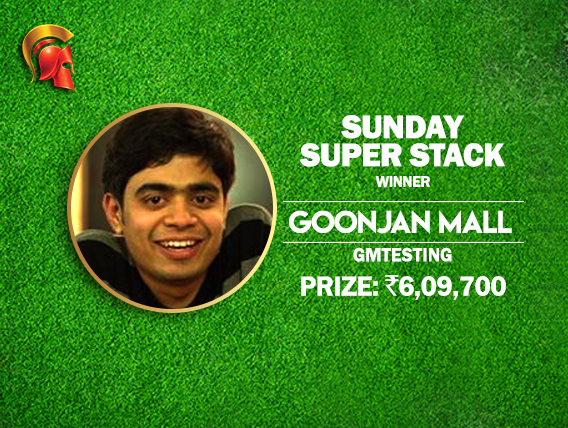 
Just a couple of nights back, Goonjan Mall aka ‘gmtesting’ began his weekend by shipping The Elite tournament on The Spartan Poker, for which he was handsomely rewarded a prize of INR 4.42 lakh for first place. The player then decided to end his weekend on a high too, shipping Spartan’s Sunday SuperStack tournament as well.

The Sunday SuperStack is one of Spartan’s biggest featured tournament with a buy-in of INR 5,500 and a massive guaranteed prize pool of INR 20 lakh. Yesterday’s tournament saw a healthy participation of 469 entries, and this further inflated the prize pool to INR 23.45 lakh, which was distributed among the top 50 players with a minimum cash prize of INR 11,725.

Once again, it was Goonjan Mall who ended victorious in a Spartan poker tournament, outlasting this field and taking home a prize of INR 6,09,700 for first place. He beat ‘SandeeSingh’ in heads-up, who fired three bullets to reach this stage, taking away a pretty handsome prize of INR 3,75,200.

In the final hand, SandeeSingh decided to go all-in pre-flop with Ad 8c and Mall made the call with As Th. Both players couldn’t improvise on the Qd 6s 5d flop and the 2h card on the turn didn’t help either. The Ac on the river gave both players a pair of Aces but Mall took down the pot and the title due to a higher kicker – Ten.

Mall has significantly added to his poker bankroll within the last couple of days, and he seems to have come a long way since his low-stakes poker games with friends at BITS Pilani. You never know, these couple of games may even make the entrepreneur consider taking up the game professionally.

Gutshot caught up with the winner once again after this win. We’re getting used to asking him how it feels winning titles on Spartan now. “It feels really good, obviously. The poker Gods have been kind to me this weekend,” he said about this latest victory.

When asked about what he likes most about tournaments on this platform, he said, “Spartan tournaments are fun, especially their Sunday events. There is a good mix of really strong players and realatively new players. So, one has to constantly adjust the game and play accordingly. Also, I like how games are 8-max instead of 9-max as in other sites. Overall, the experience is positive.”