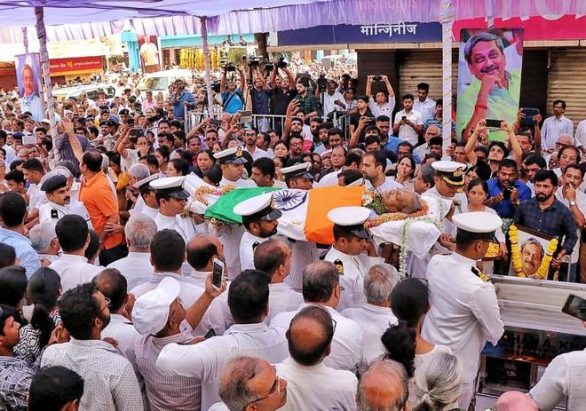 
Former Defence Minster of India and 4-time Goa Chief Minister Manohar Parrikar died at the age of 63 yesterday at his private residence in Panaji, Goa. He was battling pancreatic cancer for over a year. President of India Ram Nath Kovind and other ministers offered their condolences.

Last year, Parrikar was rushed to the state-run Goa Medical College when he complained of stomach pain and was later flown to Lilavati Hospital in Mumbai. The cause for this pain was first attributed to ‘food poisoning’ but after he returned from treatment in US, it was officially declared that he had cancer.

President Kovind, in his tweet, said “Extremely sorry to hear of the passing of Shri Manohar Parrikar, Chief Minister of Goa, after an illness borne with fortitude and dignity. An epitome of integrity and dedication in public life, his service to the people of Goa and of India will not be forgotten #PresidentKovind.”

Parrikar, who was Goa’s CM as BJP came to power following 2014 General Elections, resigned the position to serve as Defence Minister from 2014-17, on the invitation of PM Narendra Modi himself. After Goa had a hung house and BJP lost majority, Parrikar returned to state politics in 2017 as CM, this time heading a coalition government.

He continued in office despite his illness, mostly working from his private residence in the state and sometimes making brief public appearances. Opposition argued that the state needs a full-time Chief Minister and some sections had repeatedly demanded his resignation because of his health issues.

Parrikar completed his graduation from IIT Bombay and was the first CM of Goa who was an IIT alumnus, back in 2000. He became Chief Minister for 4 terms but ironically did not complete a single full term. He is now survived by his two sons Utpal and Abhijat, their spouses and a grandson. His wife Medha succumbed to cancer too, while she was an MLA in 2000.

Congress president Rahul Gandhi also weighed in on his sad demise and described him as ‘one of Goa’s favourite sons.’ Aam Aadmi Part (AAP) Goa governor Elvis Gomes commented that the State had lost a politician who changed the political discourse of the country. The Goa government declared a one-day holiday today and a seven-day mourning for Parrikar.

Keep reading GutshotMagazine.com for similar news from India and general gaming/gambling news updates from around the world.