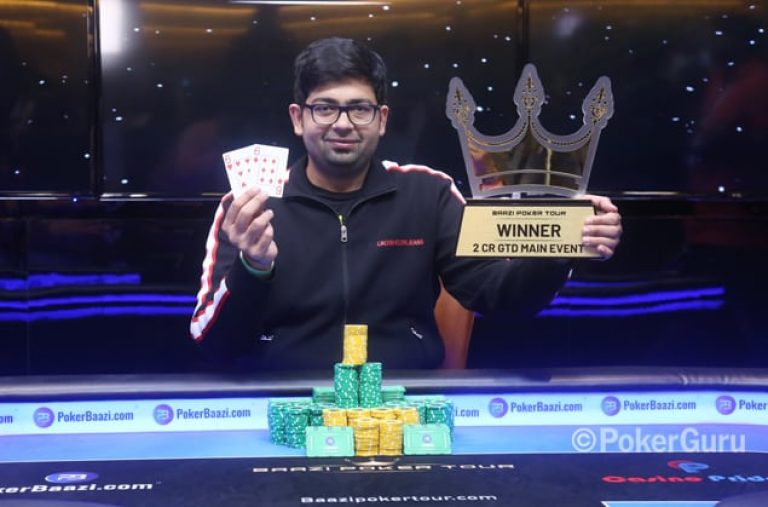 
And here we have the latest 2020 Baazi Poker Tour (BPT) Main Event champion! An incredible start to the new decade with the seven-day long series followed by the much-awaited and headlining tournament, INR 35k Main Event, another 4-day long marathon which put down a hefty INR 2 Crore GTD. Taking place in Casino Pride 2, the Goan waters have witnessed the ultimate champion of the BPT series crowning Gautam Sachdeva who crushed the event after defeating Nishant Sharma in heads-up.

The Main Event pulled out a record-breaking field of 609 players and generated a prize pool that rode past the displayed guarantee. The top 63 players were paid and when the play resumed yesterday, only 9 competitors were left in the field, led by Nishant Sharma, after Rony Chowdhury became the last player to be eliminated on Day 2, finishing 10th for INR 2.80 Lakhs.

The first casualty on the final table was Jai Saha who dropped out in 9th place for INR 3.60 Lakhs by Day 2 chip leader, Sharma. Following his tail was Himanshu Dewan who couldn’t stand Sachdeva’s pair of Aces and gradually slipping out in the 8th position for INR 5 Lakhs. Siddharth Karia followed next. One after another the players kept walking out to eventually form a 3-handed play, Sachdeva raised to 320k and Sharma folded. Vikash Mantri jammed from the BB for 3 million and got a call from Sachdeva. And that’s when the Sachdeva’s pocket four saved him another chance and Mantri settled in the 3rd place for INR 17 Lakhs.

In the final hand, Sachdeva held 6h 6d up against Sharma having Kc 10c, the flop came 3h 3c 6c and both players checked down to turn 8h. Meanwhile, Sachdeva bet 450k and Sharma raised to 1.2 million and the former called. With 2c on the river, Sharma rivered a flush and bet 1.4 million and Sachdeva moved all-in for 11 million, putting his tournament life at risk, Sharma called. And that’s when Sachdeva flipped open his full house and Sharma was railed out with his flush. The champion clinched to his career-best live cash of INR 43.21 Lakhs in prize money!

This isn’t the first win for the champion, Sachdeva is also recorded to have excelled 2016 DPT Main Event for INR 13.71 Lakhs. He also finished 9th in 2019 DPT Colossus and with yesterday’s win, the player boosted his poker bankroll. “Only emotion is that it is overwhelming!” added the newest champion, “I was destined to ship this tourney. I was about to miss the BPT Main Event. I didn’t play 1A and 1B but played 1C. I fired only one bullet, and now we are here!”

For more updates on the Baazi Poker Tour and other tournaments from around the world, stay tuned to GutshotMagazine.com.