With all the rage around the fantasy sports industry in India at the moment, we’ve seen new companies popping up dime a dozen in the past few months. We’re looking at a J-curve in this industry very soon and many companies have realized the potential, the latest one being CricPlay – India’s first free fantasy cricket gaming app.

You can play fantasy cricket for free on this platform and gain cash rewards, with three formats of the game being launched – ‘Fantasy Leagues’, ‘Super Leagues’ and ‘Daily Predictions’. While you can compete with other fantasy league gamers across the country, you can also make daily match winner predictions.

“We are excited to launch the first edition of CricPlay. At CricPlay, we believe that in a nation like ours where cricket is a religion, online games like ours are for everyone to enjoy. Our app has received an incredible response from cricket lovers across India – more than a million users have already downloaded our app and we are one of the highest rated Indian Fantasy Gaming apps in the country today,” said Gaurav Sarin, CricPlay Business Head.

Hardly a few days after launching the fantasy sports portal, CricPlay decided to jump in and compete with the big guns, and their first step towards this was signing a brand ambassador. In a country where cricket is a religion, they decided to sign former Indian opener and Delhi Daredevils captain Gautam Gambhir as their ambassador, simultaneously launching the ‘Ab India Khelega’ campaign. 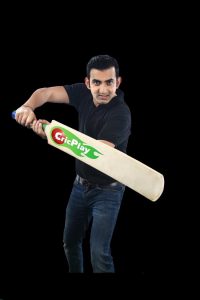 Talking about this development, Sarin said, “Gambhir’s passion for the game is at the core of CricPlay, and ‘Ab India Khelega’ is aimed at pivoting fantasy games from the current transactional nature of spending money to play, to playing for the love and joy of Cricket where all fans are welcome irrespective of their ability to spend”

Gautam Gambhir himself spoke about this latest association, saying, “As Indians, we have been united in our collective love for cricket regardless of income and age group. CricPlay’s ‘Ab India Khelega’ has resonated with me for the same reason – it’s the country’s first fantasy gaming app that breaks these barriers of entry and allows anyone and everyone to experience fantasy cricket for free. I’m confident it would emerge as a platform that validates our nation’s love for the game.”

This isn’t the first major fantasy cricket ambassador signing we have seen in the last few weeks. It wasn’t too long ago that the Pandya brothers were signed as Halaplay ambassadors, Suresh Raina was signed as Fantain ambassador and the young Prithvi Shaw was signed as ambassador of Fanmojo. Expect similar announcements in the coming weeks and we at GutshotMagazine.com will bring you all timely updates from this fantasy sports industry.