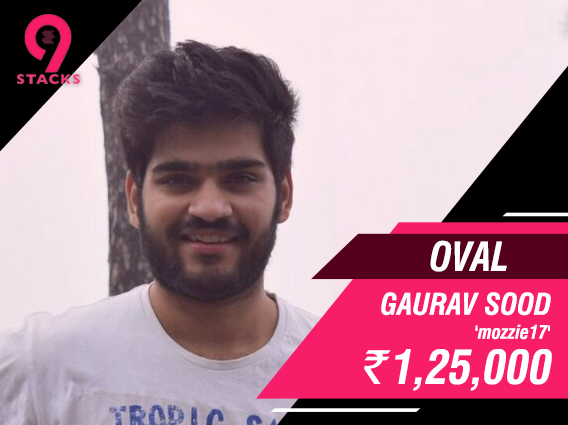 Last night, the Tuesday feature tournament on 9stacks, Oval INR 5 Lakhs GTD was played out and that too, was won by Sood playing under ‘mozzie17’. He took home INR 1,25,000 and beat Sanjay Taneja aka ‘WereWolf’ (2nd – INR 82,500) to claim his victory.

The tournament began yesterday on 9stacks at 8 pm and was in the books by 2.11 am today morning. The field of 109 entries (including 21 re-buys) were drawn to the online felts and saw the top 20 places were paid for a min-cash of INR 8,250.

The abovementioned victories weren’t the only ones Sood achieved this year. He earlier had won PokerStars India Super Tuesday in January this year. He also recently won Adda52’s biggest weekly offering, Mega Suits INR 30 Lakhs GTD for a good INR 7.2 Lakhs. He is an up and coming young player who still has his entire career ahead of him. He will be looking to repeat his success in upcoming tournaments lined up in the year.

Coming to the platform, 9stacks recently unveiled a poker rap song ‘Hustle Hai’ that’s been making news in all four corners of the poker community. They received a good amount in funding last November and looks like they’re putting it to good use. Keep reading GutshotMagazine.com for more such tournament updates, results and for general poker news from around the world.