The PUBG Mobile Pro League Season 3 is creating a lot of noise in the gaming arena. The league stages concluded with Mongolian team, Zeus Esports emerging as the champions as the team made it big with their aggressive game style.

As per the points table, Zeus Esports topped with 241 kills and 447 points which was followed by the team DRS Gaming in the runner-up spot with 180 kills and 392 points. The third spot was secured by ‘Trained to Kill’ who had 392 points while Carnage Esports was in fourth position with 378 points.

The Pro League assures USD 14 Million in prize pool and the finals will take place from 15–18 April. The top 16 teams will participate in the final league tournament. Here are the season 3 super weekend overall standings: 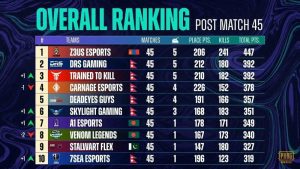 This year’s circuit is expected to be split into two seasons which will eventually culminate as one big PUBG MOBILE Global Championship (PMGC) in the last few months of 2021. The gaming brand has also introduced a new World Class tournament, where the top teams from around the world will compete this summer. The details about the World Class tournament are awaited.

To add to all of this excitement, two of India’s PUBG Mobile teams – TSM Entity and Galaxy Racers are expected to participate at the PUBG Mobile Pro League Arabia Season One. After the game was banned in the country, this would be the first competitive event in which an Indian team will reportedly participate. Even though the teams have not yet confirmed their participation, there is a strong buzz that these two Indian teams will reportedly feature. It has also been reported that the teams will relocate to the UAE.