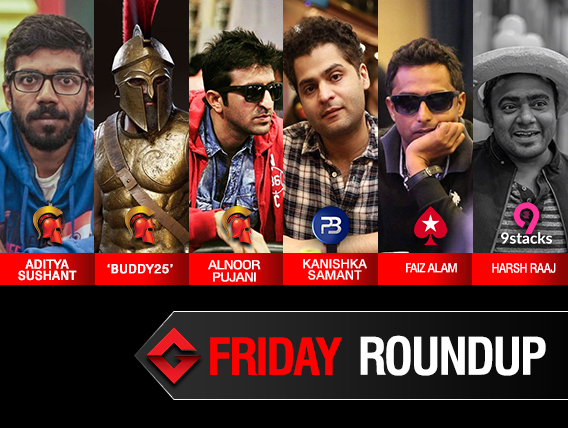 
After a chaotic week, Friday becomes the most awaited day for the citizens of the country and that’s when the streets of the virtual felts keep blazing fire. The featured tournaments across the major online platforms witnessed leading players of the Indian poker industry taking away the limelight. So, grab your seats to have a quick peek into Friday night fever…

A brand-new format for all the poker fanatics out there! The fourth Millionaire of the month, Millionaire Lite with a 50 Lakh GTD to the first-place hosted by Spartan Poker, hit the screens at just INR 1,650 buy-in. The tournament wrapped up Day 1A, and the initial day itself was a massive success, recording a tremendous 994 field. Sitting at 6th in India’s All-Time money list, Aditya Sushant aka ‘SuperuSer’ amassed the largest stack of 2,77,519. Sushant is closely followed by another online crusher Vivek Singh aka ‘KasolHieghts’ bagging 2,32,777 chips.

A marvelous night with several pros of the country taking to their seats and advancing to Day 2 include Faiz Alam aka ‘DrStrange’ (7th), Myron Pereira aka ‘mehhhhh’ (11th), Hitesh Batra aka ‘hitesh bhai’ (16th) and so on. The survivors of Day 1A will be advancing and combining with the progressing players from Day 1B and 1C (30th Nov and 1st Dec respectively) to Day 2.

Surpassing the guarantee The Elite INR 25 Lakhs GTD, a featured tournament hosted on Spartan Poker. The guarantee shoots up to become INR 29 Lakh in prize pool, observing a pretty good field as each player chipped in a buy-in of INR 11,000. It was an anonymous player ‘Buddy25’ to triumph the Friday night. The tournament ended with the players settling for a 3-way deal and ‘Buddy25’ carrying the largest stack of 1.74 million walked away with the first-place prize money.

TGIF INR 10 Lakhs GTD is reserved on Spartan Poker for each Friday. Once again, recording a huge field with each player equally chipping in INR 1,650 buy-in. Taking away the healthy cash prize was Alnoor Pujani aka ‘loThbrOck’ railing out his opponent ‘Hi mad’ in heads-up and placing him in the runner-up position.

The tournament came down to the final two, Pujani with a larger stack of 3.8 million holding Jh Ad up against his opponent ‘Hi mad’ holding Ts Td with 3.1 million chips. The latter raises 350k and the former re-raise to 1.75 million. Immediately, the table saw the entire stack of ‘Hi mad’ in the middle. The board runs Ah 9h 8s 9s 4c, and that’s when Pujani flips his Aces and Nines over his opponent’s Tens and Nines.

Friday night on PokerBaazi was all about FRI-YAY INR 10 Lakhs GTD, hosted at 8 pm for a buy-in of INR 4,400. One of the leading players in the country Kanishka Samant aka ‘Highness’ powered through the field beating Siddharth Pandey aka ‘Siddonuts’ in heads-up. Samant grabbed healthy 2,20,900 in prize money while Pandey settled for INR 1,55,000.

A portion of the prize pool was taken away by the top finishers including Ashish Munot aka ‘chipcharity999’ (3rd), Honey Bijlani aka ho9ey’ (5th), Arsh Grover aka ‘BiggggTymeR’ (10th), Neeraj Kumar aka ‘SelfClaimedPro’ (15th), Muskan Sethi aka ‘Muskan Sethi’ (29th), Sagar Choudhury aka ‘sagarpupull’ (34th) and others

Lately, Harsh Raaj aka ‘littleboy’ has been strengthening his poker bankroll and once again he won the StackUp INR 2.5 Lakhs GTD on 9stacks. Raaj fired two bullets to win the prize money INR 65,000 beating the anonymous player ‘vikrambatra’ and pushing him in the runner-up position.

Ajay Ahmed aka ‘H4X0R’ (6th), Amresh Kumar aka ‘Termi’ (8th), Ashish Kumar aka ‘AK19’ (15th), Raj Kumar Gahlot aka ‘Fireman’ (18th) and others were few notables to finish in the money. For the latest updates on live and online poker tournaments keep reading GutshotMagazine.com and stay tuned!