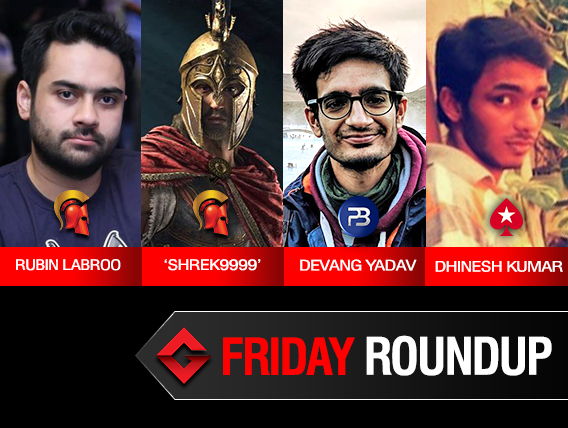 
The weekend is here, and the poker players are all geared to grab the title of the highest guarantee tournaments. The new year has definitely added spice to these featured tournaments taking place across the leading platforms in the country. Besides, the 4-day online festival, Baazi Poker Tour Online (BPTO) is underway on PokerBaazi that hosted the biggest guarantee tournament yesterday night. And here is a complete summary of Friday majors…

Spartan Poker hosts two major tournaments on Friday night, and one of them being TGIF INR 10 Lakhs GTD which lured a massive number of 793 entries for a buy-in of INR 1.650. Undoubtedly, the event turned out to be successful as the guarantee was surpassed to create a higher prize pool of INR 11.89 Lakhs. Dominating this field was a prominent face in the circuit Rubin Labroo aka ‘kornkid’ who eliminated ‘Junior-KK’ in heads-up to add another title to his already crowded poker cabinet.

Another flagship tournament hosted on Spartan Poker was The Elite INR 25 Lakhs GTD whose guarantee was seen to be crushed, creating a bigger prize pool of INR 29 Lakhs and a share of which was later taken away by the top finishers. However, bagging the first-place prize money was an anonymous player ‘Shrek9999’ who was announced the official winner after the players settled for a 3-way deal. Ashish Ahuja aka ‘Spewushhhiiiii’ finished in the second place and Avadh Shah aka ‘cateyes’ in the third position.

By now, every active player in the country knows that Baazi Poker Tour Online (BPTO) is underway on PokerBaazi, hosting a 4-day series that kicked off on 2nd January. The biggest tournament BPTO Highroller assured INR 50 Lakhs! And the top 6 players will take their seats on the final table that will resume in Goa on 6th January at 6 pm. However, it is Devang Yadav aka ‘laila’ who will be leading the table followed by Shagun Jain aka ‘sogani22’ (2nd), Chirag Bhardwaj aka ‘Olandir’ (3rd), Ashish Ahuja aka ‘rocky3705’ (4th), Raghav Bansal aka ‘thatssosick’ (5th) and Sanat Mehrotra aka ‘mehro2511’ (6th).

PokerStars hosted a bounty tournament Uppercut INR 10 Lakhs GTD last night at 7:30 sharp. After 7+ intense hours of grinding and firing two bullets was an online crusher Dhinesh Kumar aka ‘you3betl4bet’ who pocketed INR 93,049 along with the bounties! With his standout performance, he beat Rubin Labroo aka ‘kornkid’ in heads-up. The anonymous runner-up managed to walk about with INR 67,049.

For similar updates from the online poker world, stay tuned to GutshotMagazine.com.