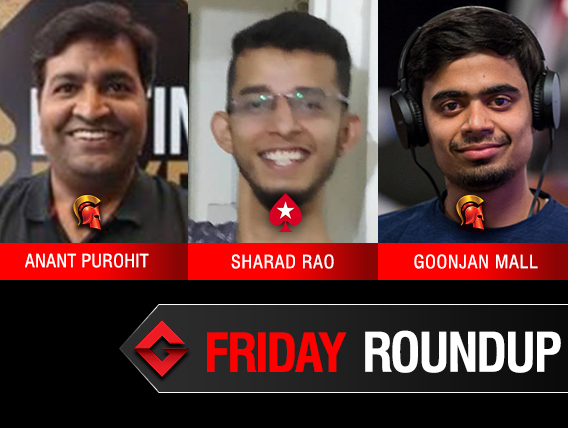 
Every day is an opportunity to win big on the online felts and Fridays are no different. While most of the pros are out in Goa playing the Baazi Poker Tour (BPT), a significant number of entries were recorded in all the online tournaments last night, with a few known players winning titles and some new faces also cropping up. Keep reading for a complete summary of last night’s online tournaments…

Like the name suggests, this one is only for the elite group of poker players in India who have a decent bankroll and who are good enough to compete with the best. With a buy-in of INR 11,000, a total field of 187 entries registered last night on Spartan Poker, and from them, the top 20 received pay-checks, each cashing for a minimum of INR 26,800. The 8+ hour grind ended at 5:19am and at this point of time, Goonjan Mall was the last man standing, playing as ‘gmtesting’ on Spartan. He took home a handsome prize after beating Aditya Chaudhary aka ‘S1ckB3at’ in heads-up. Other known names to cash on the night were Yowan Patel (3rd), Guneet Kwatra (5th), Hitesh Batra (8th), Raman Gujral (9th), Anurag Srivastava (13th), Anant Purohit (17th), Faiz Alam (20th) and others.

Elite isn’t the only featured tournament taking place on Spartan on Fridays and TGIF saw a decent field as well, attracting 539 entries in all, surpassing the guarantee as each entry paid INR 1,650 to join the competition. Beginning at 8pm and ending at 3:57am this morning, there were quite a few known entities in the top 55 places that were paid a min-cash of INR 3,961. Having both made deep runs in Elite too, Anant Purohit aka ‘Pro’ and past Millionaire winner Hitesh Batra aka ‘hitesh bhai’ found themselves in heads-up, where they decided to cut a deal and chop the tournament. With a slightly larger chip stack at the time, Purohit claimed the title while Batra settled for the official runner-up spot, though both won nearly similar prizes.

Everyone loves the progressive knockout format in online poker and PokerStars India hosts this tournament every Friday night on their platform. Last night, they attracted 197 entries with a buy-in of INR 4,400 and it was an even more special day for them as their own ambassador Sharad Rao aka ‘sordykrd’ emerged victorious. Hired as their dedicated Twitch streaming ambassador, Rao beat the field with ease and took home a cash prize of INR 76,566 from the tournament prize pool and an additional INR 65,531 from the bounty prize after beating ‘wardev’ in heads-up. It was a good night for Hitesh Batra in online poker as he finished 4th in this tournament as well.