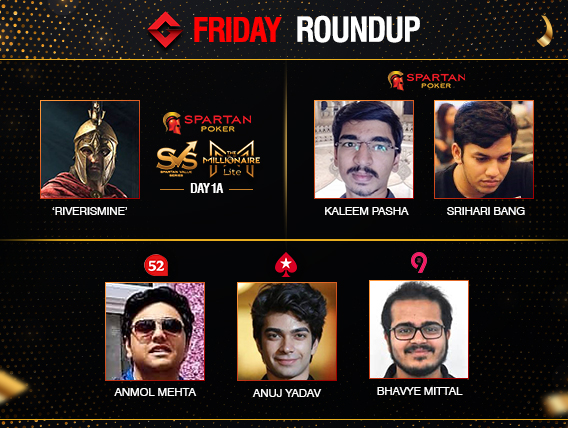 
Fridays are dedicated to high-value tourneys in the leading online platforms and yesterday was no different. While the sites ran their flagship events, Spartan Poker hosting February edition’s SVS put down Millionaire Lite offering 1 million to the first place. On the other hand, 9stacks Super Series is also underway until 23rd promising INR 45 Lakhs as a series guarantee. And here is the complete summary of Friday majors…

One of the key tournaments in the current Spartan Vale Series (SVS), Spartan Poker hosted February month’s Millionaire Lite promising INR 10 Lakhs GTD to the first place with a buy-in as low as INR 1,650! Consisting of three starting flights, Day 1A drew a total of 620 entries. After 4+ hours of the grinding session, it was ‘riverismine’ to accumulate the largest stack of 172,681 who will now be leading with 61 survivors to Day 2. Following the chip leader was Sumit Sapra bagging 171,201 chips and ‘masterbluff’ with 157,488 in the third position.

On Friday night you can participate in two flagship tournaments hosted on Spartan Poker and one of them hosted last night was TGIF INR 10 Lakhs GTD which was crowded by 585 entrants after each one chipped in INR 1,650. The top 63 finishers ended in the money but the one to secure the biggest cut from the prize pool was Kaleem Pasha aka ‘TheSherlock’ who defeated Venkatesh Mukundan aka ‘Borissss’ in heads-up.

One of the most popular weekly tournaments on Spartan Poker is The Elite INR 25 Lakhs GTD. And last night garnered 251 entries who paid INR 11,000 individually. Eventually, the event saw the top 27 places receiving a paycheck from the INR 25.10 Lakhs prize pool. Capturing the valuable title along with hefty prize money was Srihari Bang aka ‘bangbang99’ who has been making a few deep runs this year.

With a buy-in of INR 4,400, a total of 157 runners enrolled in FRIYAY INR 6 Lakhs GTD hosted on PokerBaazi. Coming on the top was ‘Ianumar1963’ who railed out Aman Kejriwal aka ‘alwaysriver’ in heads-up to add INR 1.54 Lakhs in prize money. Kejriwal secured the second-place payout of INR 1.08 Lakh for his efforts.

The money reached the top 18 places including Rajat Sharma aka ‘Lung Fakeer’ (6th), Rony Chowdhury aka ‘bisadip176’ (7th), Danish Shaikh aka ‘pagla’ (8th) and so on.

Adda52’s Friday marquee The Ballers INR 15 Lakhs GTD was taken down by circuit grinder Anmol Mehta aka ‘anzzzzz’ who also finished 3rd in Spartan TGIF (read above) last night. Mehta conquered a field of 307 entries and defeated ‘Aarchit’ in heads-up for a hefty INR 5.25 Lakhs while his opponent settled in the runner-up position bagging INR 3.18 Lakhs. The entire tournament collected INR 21 Lakhs in prize pool and 34 top players took home their hard-earned money.

PokerStars hosted a bounty tournament Uppercut INR 10 Lakhs GTD last night at 7:30 pm. The event pulled out 240 entries after paying INR 4,400 out of which only 47 finishers earned a slice from the prize pool. Circuit grinder Anuj Yadav aka ‘brockLesnar95’ knocked out Sushant Singh aka ‘sush2209’ in heads-up to bag INR 1.23 Lakhs in prize money.

9stacks’ is hosting a three-day long 9stacks Super Series and yesterday concluded event #5 Highroller INR 7 Lakhs GTD. The entire tournament attracted 136 entries for INR 5,500 buy-in out of which only 20 managed to earn a payout. Claiming the day was online crusher Bhavye Mittal aka ‘noobpro’ who defeated Akash Shekhar aka ‘K9_A’ in heads-up to ship INR 1.82 Lakh in prize money. However, Shekhar added INR 1.26 Lakhs for finishing in the runner-up position.

The top players receiving a payout include Honey Bijlani aka ‘ho9ey’ (4th), Sreekanth Narayan aka ‘n0thing’ (10th), Srihari Bang aka ‘bangbang1999’ (15th), Harsh Bubna aka ‘harsh1327’ (18th) and so on. For more updates on the top online and live poker tournaments in India and around the world, stay tuned to GutshotMagazine.com.