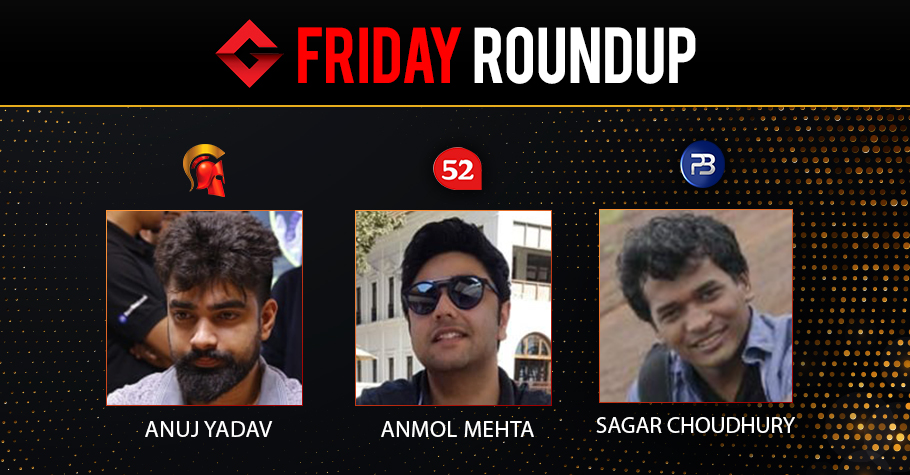 
Friday night is done and it’s time to say hello to the weekend. Sure, we’re all locked down, but there’s no shortage of poker action happening on the online felts, with the guarantees just getting bigger and better by the day. Last night, we had a number of features being hosted and your regular online grinders went on to ship most of them, proving once again that poker is purely a game of skill. Take a look at last night’s summary…

Over the years, this tournament on Spartan Poker has always pulled in the most elite crowd of players, those who can afford the INR 11,000 buy-in and those who know their game well. 506 entries broke the guarantee slightly in this tournament which was a part of the Spartan Super Series (SSS) and the top 47 places finished in the money, with a min-cash of INR 28,842.

Eventually, it was Anuj Yadav aka ‘tittooTauji’ who went on to bag top honours, grabbing the title and of course, the heavy cash prize that comes along with it. It was a packed Final Table where Laksh Pal Singh aka ‘LuckyBhai$’ finished 5th, Neeraj Kumar aka ‘SelfClaimedPros’ finished 4th, Vivek Singh aka ‘KasolHieghts’ ended 3rd and ‘Sands Myth’ finished as runner-up. Another featured tournament that took place last night on Spartan was TGIF INR 15 Lakh GTD which was shipped by ‘VantaBlack’ for a decent bankroll addition.

On this platform too, we have a series taking place in the Adda52 Online Poker Series (AOPS) and the Calangute tournament attracted 502 entries on Adda52 at a buy-in of INR 7,500 each, with the grind beginning at 9pm last night and ending earlier this morning at 5:39am. It was another tough fight among some known players but eventually, Anmol Mehta aka ‘anzzzzz’ took home the title, adding a whopping INR 8,21,674 to his bankroll after this win. In heads-up, he got past ‘vinaysk’ who was also decently awarded with INR 4.7+ Lakh for finishing in second. Popular face Goonjan Mall ended in third place, pocketing INR 3.25 Lakh for his efforts last night.

At 8pm, an INR 3,300 buy-in tournament kicked off on PokerBaazi called The Ridge. Again, a number of known names were among the 368 entries that played the game last night. Eventually, Sagar Choudhury aka ‘sagarpupul’ took home the biggest share of the prize pool, bagging INR 2.32 Lakh for this victory after he beat Jayjit Ray aka ‘england’ in heads-up. Both these players have been in this position hundreds of times in the past and it must’ve been an exciting heads-up session between them. The tournament wrapped up by 2:57am this morning.

For more updates on the biggest online and live poker tournaments in India, stay tuned to GutshotMagazine.com.