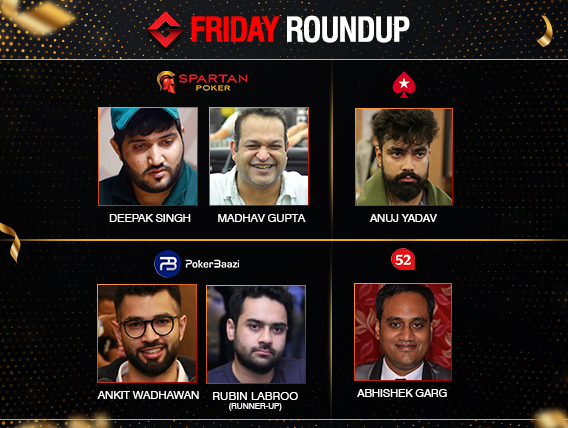 
Another incredible night came to an end yesterday with marvelous guarantees. One of the major attraction on Friday was The Elite – Highroller that assured INR 55 Lakhs in prize pool and Madhav Gupta, a prominent name in the industry triumphed the event! Including this, other two features were also a part of the ongoing Spartan Super Series. PokerBaazi’s FRIYAY, Adda52’s The Ballers and Uppercut of PokerStars guarantee were surpassed and the winner’s ended up earning huge sums of prize money. And for your reference, here is a complete summary of Friday night…

The first of the three feature tournaments on Spartan Poker was Dominator INR 6 Lakhs GTD which began at 7 pm last night. A total of 341 entries logged in after paying 2,200 which eventually generated a prize pool of INR 6.82 Lakhs. It was Deepak Singh aka ‘Optimist’ who seized the first-place cash prize along with the winner’s title while his opponent ‘Speedpost09’ ended up in the runner-up position.

TGIF
Spartan Poker’s TGIF INR 12 Lakhs GTD attracted was crowded by 1,095 entrants who chipped in INR 1,650. The entire tournament collected a prize pool of INR 16.42 Lakhs and the top 95 places ended up earning a portion from the same. ‘Don Julio’ topped the list and secured the first-place prize money while yesterday’s PokerStars’ Highroller winner Laksh Pal Singh aka ‘LuckyBhai$’ ended up in the second position.

INR 55 Lakhs was assured in Spartan Poker’s The Elite – Highroller which garnered a total of 320 entries after individually a buy-in of INR 27,500. This led to the smashing of the advertised guarantee and creating INR 80 Lakhs in prize pool, a share of which was taken away by the top 31 finishers. It was circuit popular Madhav Gupta aka ‘Madzoopa’ to come out on top and bag the 7-digit figure while his opponent ‘TiltAtma’ settled in the runner-up position.

A total of 271 entries joined the field after each paid INR 4,400 as buy-in in the PokerBaazi’s FRIYAY INR 6 Lakhs GTD. The tournament eventually collected INR 8.13 Lakhs in prize pool and the top 36 players earned a min-cash of INR 5,528. Claiming the first-place prize money was circuit popular Ankit Wadhawan aka ‘d00mtr00p3r’ who eliminated yesterday’s Adda52 Godfather winner and the 2020 India Poker Champion Rubin Labroo aka ‘kornkid’ in heads-up for INR 1.79 Lakhs while Labroo secured INR 1.26 Lakh for settling in the runner-up position.

The marquee event on Adda52 was The Ballers INR 15 Lakhs GTD was crushed after 493 entries pounced on the field, chipping in INR 7,500. This led to the creation of the final prize pool of INR 33.77 Lakhs which was shared among the top 49 players. Outlasting the field was online grinder Abhishek Garg aka ‘thegrinder’ who a hefty INR 8.27 Lakhs in cash prize. Garg beat ‘thepokerfaceblr’ in heads-up who secured the second place payout of INR 4.89 Lakhs.

PokerStars’ Friday tourney Uppercut INR 10 Lakhs GTD fetched 326 entries after each paid INR 4,400 as buy-in amount. Soon, the advertised guarantee was surpassed to create INR 13.04 Lakhs in prize pool and at least INR 3,504 was assured to the top 59 finishers. Capturing the winner’s title was circuit reg Anuj Yadav aka ‘brockLesnar95’ who defeated ‘raghav1990’ in heads-up in the runner-up position. Both players earned INR 99,527 for their efforts.