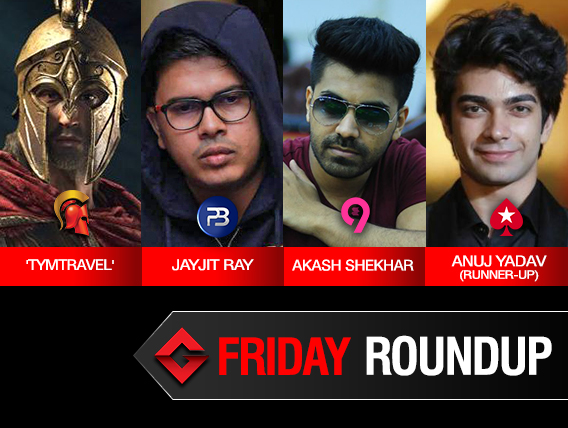 
Friday isn’t the biggest day when it comes to tournament guarantees online, but there was still plenty to play for last night. On Spartan Poker, another edition of the India Online Poker Championship (IOPC) kicked off while the regular feature tournaments were played on other platforms. Keep reading for a complete summary of last night’s tournaments…

There was much excitement for the start of IOPC on Spartan Poker and Elite was the first major tournament on IOPC Day 1, and the guarantee was absolutely smashed. With 410 entries each paying INR 11,000 as the buy-in, the prize pool was inflated all the way up to INR 41 Lakh, wherein the top 39 places took home a share of the prizes. Beginning at 9pm and ending at 5:20am this morning, it was a long and hard grind which saw Bheem Singh Meena aka  ‘TymTravel’ emerging victorious and bagging a massive top prize to kick off proceedings in IOPC. In heads-up, he got past ‘ganesha3009’ who also took home a pretty handsome prize for second place.

Having cashed in the IOPC Elite tournament, Jayjit Ray had a better night on PokerBaazi, where he plays under the name ‘england’. He played in the Friday feature and went on to ship it as well, taking home INR 1,82,242 in prize money for this victory. The guarantee was passed and a new prize pool of INR 8.2+ Lakh was created thanks to the 275 entries that all paid the INR 4,400 entry fee to play.

This tournament was a part of PokerStars’ Winter Series and in Event #31, we had 382 entries paying INR 4,400 each in this 6-Max tournament, which was good enough to pass the guarantee and create a new prize pool of around INR 15.8 Lakh. This was shared among the top 71 places with the min-cash at INR 3,365 and eventually, it was ‘1II|1II|II1|’ who went on to ship the tournament, winning a prize of INR 2.35 Lakh for the effort, including bounties. In heads-up, he got past the familiar face of Anuj Yadav who goes by the name ‘brockLesnar95’ on PokerStars India, adding around INR 1.75 Lakh to his poker bankroll for finishing second here.

The StackUp tournaments on 9stacks (sign-up with code “GUTSHOT”) are becoming increasingly popular and last night, 74 players participated with the buy-in fixed at INR 1,100. Beginning at 7:59pm last night, it went on until 18 minutes past midnight and the winner to be declared was Akash Shekhar aka ‘K9_A’ who took home the top prize of INR 28,000! He fired 2 bullets and beat ‘virat_kohli’ in heads-up, the latter winning INR 20,000 for finishing second.

For more updates on the daily online and live poker tournaments from India and around the world, stay tuned to GutshotMagazine.com.