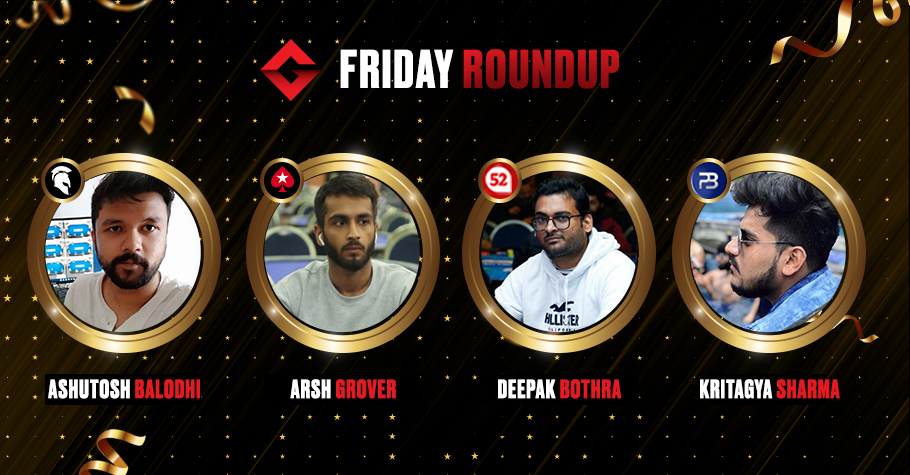 
Spartan Poker, PokerBaazi and Adda52 had several high-value tournaments yesterday. The Super Highroller tournament on PokerBaazi’s National Poker Series was a major attraction. PokerStars conducted a ₹10 Lakh worth Bounty tournament and saw several pro players compete for the top spot. Let’s take a look at what went down yesterday.

Spartan Poker’s Futuristic tournament had 817 entries in total. The top 103 players in this tournament were paid a min-cash of ₹2,565. ‘LorenzoVonMatterhorn’ shipped this tournament and won ₹1,79,930 in prize money. The runner-up was ‘DKP24’ who received a payday of ₹1,10,105.

Adda52 drew 402 entries in total and the advertised guarantee of this tourney was ₹22.5 Lakh but it was crushed and the final prize pool stood at ₹27,53,696. This ₹7,500 buy-in tournament was shipped by Deepak Bothra aka ‘bothras’ who had a payday of ₹5,77,981. The runner-up in this tournament was Piyush Verma aka ‘piyushverma’ who cashed ₹5,17,992.

The Elite tournament on Spartan Poker is always one of the highly anticipated events. This tournament was shipped by Ashutosh Balodhi aka ‘SpewMonkey’ who took a hefty ₹7,13,635 in prize money. The tournament had 383 entries in total and the top 31 players were paid a min-cash of ₹33,704.

The ongoing National Poker Series (NPS) on PokerBaazi welcomes you with its exclusive anthem. While players must’ve started grinding and tapping their feet, Kritagya Sharma aka ‘Kritagya_17’ shipped the Marathon tournament and cashed ₹4,78,000 in prize money. The runner-up in this ₹3,300 buy-in tournament was a mystery player ‘elefante’ who received a paycheque of ₹3,35,000.

The tournament had 911 entries in total and the top 108 players were paid a min-cash of ₹4,646. The advertised guarantee of this tournament was ₹15 Lakh but it was crushed by a greater margin and a massively huge prize pool of ₹27,33,000 was formed.

Highroller tournaments are always crowd pullers. While a normal Highroller would be fun, the super highroller on PokerBaazi attracted 379 entries in total. The top 45 players in this tournament were paid min-cash of ₹63,670.

This ₹33,000 buy-in tournament was Satyam Prakash aka ‘Pkiller28’ who took home a whopping ₹23,88,000 in prize money. Prakash was followed by Ankit Wadhawan ‘d00mtr00p3r’ who received a payday of ₹16,71,000. The advertised guarantee of this tournament was a whopping ₹1 Crore guarantee but it was crushed by a smaller margin and a new prize pool of ₹1,14,00,000 was formed.

This Magic Edition tournament on PokerStars was a bounty event. The tournament was a deal between Pros Arsh Grover and Anirban Das. Grover made it to the top with 205 total entries and took home ₹1,02,087 in prize money while Das made the same amount too. The bounty prize money differed quite extensively as Grover won ₹72,328 while Das received ₹32,328 in bounty prizes.

Other than making it to the headlines everyday, Grover also has a very colourful instagram handle. We did an exclusive article about his social media handle. Check it out!