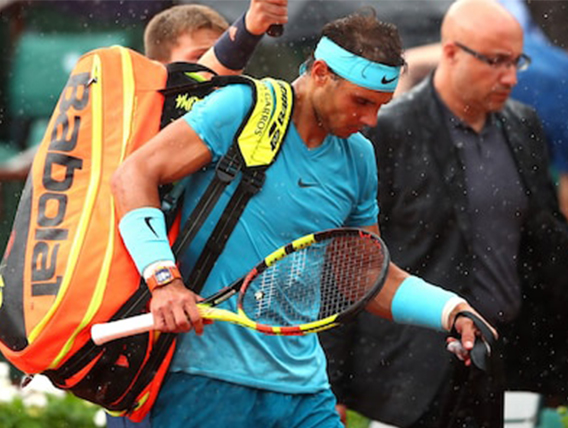 
Top seed Rafael Nadal will resume his fight to stay in the French Open on Thursday after his quarter-final against Argentina’s Diego Schwartzman was held up by rain. Nadal, aiming for an 11th French Open title, trails the 11th seed 6-3 3-5. The Spaniard lost his first set at Roland Garros since 2015 before a one-hour rain delay halted play.

Nadal, 32, fought back when the match resumed but more rain came and it was abandoned for the day at a little after 6:30pm local time. Nadal and Schwartzman will resume a gripping last-eight match at 11:00 BST (3:30 pm IST) on Thursday, with the 25-year-old Argentine seeking to become only the third player to beat Nadal in 86 singles matches at the French Open.

Nadal suffered a shock last-16 loss to Sweden’s Robin Soderling in 2009 and, less surprisingly, to then-world number one Novak Djokovic in their 2015 quarter-final. He also pulled out of the 2016 tournament with a wrist injury before his last-32 match against fellow Spaniard Marcel Granollers.

Wednesday’s other quarter-final was also postponed until 11:00 BST on Thursday because of the rain, with Croatian third seed Marin Cilic and Argentina’s Juan Martin del Potro level at 5-5 in a first-set tie-break.

Nadal is the hot favourite to win the tournament, having dominated on the red clay since making his debut in 2005. But a seismic shock looked on the cards when Schwartzman, who has not beaten Nadal in five previous attempts, won the first set. Despite only standing 5ft 7in, the Argentine possesses a stinging forehand and used it aggressively to rock 16-time major winner Nadal.

He hit 20 winners as Nadal’s winning streak of 37 sets at Roland Garros, going back to his 2015 quarter-final defeat by Novak Djokovic, was ended. Nadal, who spent almost three months out of the game after the 2016 French Open with a wrist injury, needed treatment on both of his wrists at the end of the first set.

The world number one went a break down at 2-1 in the second set, only for Schwartzman to hand it straight back to love. But the inspired Argentine broke Nadal again to claim a 3-2 lead. Then came the hour-long rain break, which disrupted Schwartzman’s momentum and allowed Nadal to regroup.

Nadal, returning with his famed forehand finally firing on all cylinders, earned back-to-back breaks to move within a hold of the set. He led 30-15 as he aimed to tie the match before more rain arrived and the players ran off court – this time for the night.