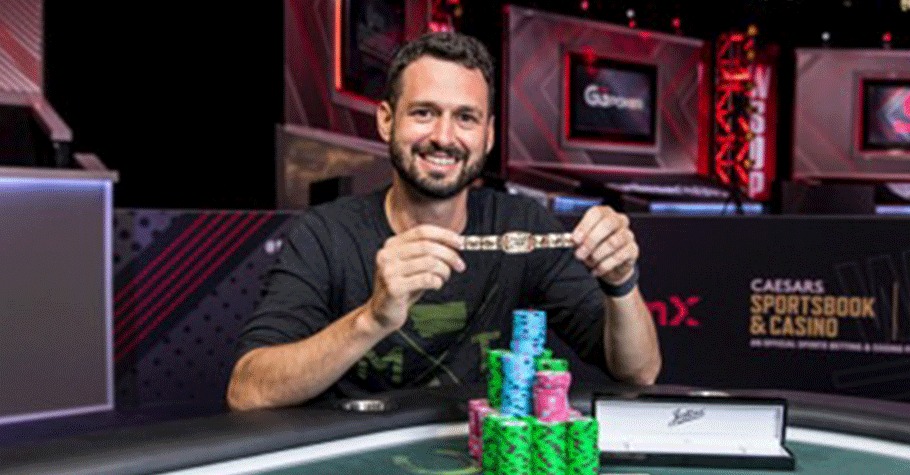 
With the 2022 World Series of Poker (WSOP) going on with full steam, poker players from across the globe are flocking to the Mecca of poker – Las Vegas to participate in the annual poker fest. Several players are making their dreams come true by taking home the coveted WSOP gold bracelet. And one more player who has made his dream come true by clinching his first-ever WSOP bracelet is Alex Livingstone.

And what a feat it was for Livingstone, who had no live tournament victory so far. What better than winning a WSOP event to mark your first live tournament victory. We can only imagine how amazing it would have been for the Canadian poker player. He entered Day 3 of Event #9: $1,500 Seven Card Stud as the chip leader and continued to dominate throughout the five hours of play to ultimately emerge victorious by beating Daniel Weinman in the heads-up and add a WSOP bracelet to his credit along with a top prize of $1,03,292.

Talking about his victory and his plans for the upcoming WSOP events, Livingstone said, “I used to be mostly just a cash game player. Since the Main Event (third-place finish at 2019 WSOP ME), it got me more inspired to play a few more tournaments, especially going harder during the world series. So, this win doesn’t really change my plans for this WSOP as I was going to play a full schedule anyway.” When asked about the seven-card stud poker format, he says, “It’s probably my worst game. I am good at Razz and Stud-8 but I don’t think I am that great in stud. Anyone could have won with the cards I was dealt, I ran very well.”

The $1,500 buy-in event saw 329 players battling it out for the $4,39,215 prize pool. The top eight players made it to the final table on Day 3 of the event. The first casualty on the final table was short-stacked John Evans, who felted at the eighth place for $9,391.

Livingston also shared that he had a friendly banter with the runner-up, Weinman and that they had a bet about who will wear the new bracelet. “Dan and I are going to go golfing and he said that I have to wear the bracelet on the first hole” he says with a smile.