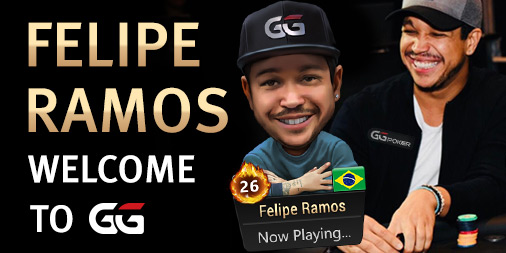 
Undoubtedly, since the change in the calendar, the poker industry is flashing news that is making the headlines and grabbing huge public attention. The year commenced with jaw-dropping news of Twitch godfather Jason Somerville ending his 5-year relation with PokerStars and once again. However, the signing of brand ambassadors is a new avatar by the world’s leading poker platforms including GGPoker that launched in 2014.

It was November 2019 that a new broke out of six-time bracelet winner Daniel Negreanu leaving PokerStars after 12 years and joining hands with GGPoker as a network ambassador. Also, in 2018 March, world number one, Bryn Kenney took the center stage after signing with Asia’s biggest poker network. However, it was now time for the top-ranked poker player and iconic representative for his home country, Filipe Ramos to join GGPoker. Also known as ‘Mojave’ has over $2.6 million in total live earnings and sits 4th in Brazil’s All-Time money list.

Ramos has become one of the recognized poker pro of Latin America, highly successful and the owner of the WSOP Circuit ring, he is also a renowned online coach helping out other players to achieve their poker aspirations, an advocate for the crucial mental element of the mind sport in which he has built his career.

It was on 2nd January that the Asian operator welcomed the newest ambassador to the team by tweeting, “Team GGPoker just hit Latin America! Brazilian pro Felipe Mojave Ramos has joined forces with DNegs and BrynK to bring the greatest experience the poker world has yet seen. We’re excited to welcome Felipe! Leave congrats in comments to win a freebie MASTER SERIES ticket.”

After partnering with the prominent players in the world, GGPoker is exposing its product to the new audience in key areas around the globe after already building a solid base before opening its door to European and Canadian-facing operators. However, GGPoker’s current daily volume is lower than PokerStars’ but they have been pacing to build up the same. For more poker news and updates, as well as updates from the gaming industry around the world, keep reading GutshotMagazine.com and stay tuned!