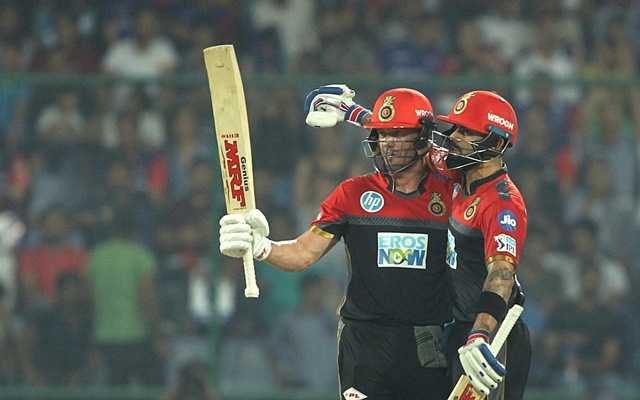 Saturday’s second match of the Indian Premier League had Royal Challengers Bangalore taking on Delhi Daredevils in the Feroz Shah Kotla stadium. The match was a masterclass in batting and no matter who they supported, the audience was treated to a fine exhibition of batsmanship from Virat Kohli and AB de Villiers who put together a century partnership.

The visitors cruised to a five-wicket win yesterday. Kohli made 70 off 40 balls while de Villiers was unbeaten on 72 helping RCB over the finish line with six deliveries to spare. While this win keeps RCB’s hopes alive to make the final four, it’s been a rough road for DD as this recent exit out of this year’s IPL makes it six exits in as many successive editions of failing to reach to surpass the league stage.

Kohli decided to chase after winning the toss and opened with Yuzvendra Chahal. The tactic proved effective as Delhi found themselves at 21 for 2 very early on. Rishabh Pant carried on from this unbeaten century against SRH the other night. Pant would score yet another half-century in the company of DD captain Shreyas Iyer. Iyer though was not at his fluent best putting together a scratchy 32 off 35. Pant was in a magnificent form and it took a stunning catch from de Villiers on the boundary to send Pant on his way making a useful 34-ball 61.

But Pant’s dismissal didn’t ease things for RCB as 17-year-old Abhishek Sharma knocked the ball around the park to help DD get to 181 in 20 overs. Sharma made his IPL debut with two others in Nepal’s Sandeep Lamichhane and SA’s Junior Dala. These debutantes came in to replace Shadab Nadeem, Glenn Maxwell and Liam Plunkett. While Junior Dala didn’t have the greatest debut, Lamichhane fired hard for DD. Opening the bowling for Delhi, with Trent Boult at the other. Lamichhane got a scalp in his second over getting Parthiv Patel LBW and by the end of Powerplay, he had 1 for 7 off two overs. While he took no more wickets, he kept a rein on the runs conceding just 25 from his quota.

The Kohli-de Villiers duo have not come together previously in this IPL in a significant manner but with two early wickets falling, this decided to solidify and did most of the heavy lifting in getting their team home. Sadly, its the end of the road for the Daredevils but if there is any consolation they can take from yet another disappointing season, it’s that their young bench has it in them to be match winners. Man of the Match: AB de Villiers.