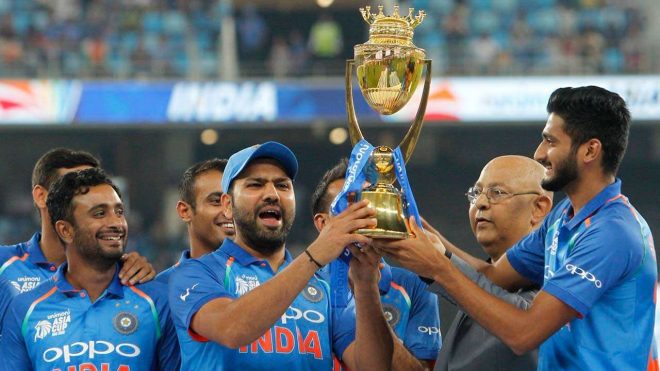 Yesterday was the finals of this year’s Asia Cup 2018 and the match was being played between India and Bangladesh. Having won the toss, Indian skipper Rohit Sharma decided to bowl first. Bangladesh decided to promote Mehidy Hasan to open with Liton turned out to be a wise move for Bangladesh after they were asked to bat. The started off with great confidence and managed to keep scoring runs of the Indian bowlers, as the Indian seamers weren’t as disciplined as they were in the earlier games, which forced the early introduction of Yuzvendra Chahal into the attack.

Such was Liton’s confidence that he jumped down the track a couple of times to Bumrah to send the ball to the fence and even swept and slog-swept Chahal for a couple of sixes. Barring some swing early on, there wasn’t much help for the bowlers on a pitch that favoured the batsmen a lot more than it did in the earlier games. This meant that Bangladesh openers were able to play their shots with more freedom, resulting in the best start in the competition and a century partnership.

But the ghosts of the past collapses returned to haunt Bangladesh again. Mostly untroubled for the first 20 overs of the innings, they suffered a major collapse, losing five wickets for 31 runs. The batsmen themselves were to blame for leaving their team in a perilous position, with their injudicious shot selection bringing about their downfall. Mehidy and Mushfiqur Rahim fell to innocuous deliveries from Kedar Jadhav while Mahmudullah played an uncharacteristic slog sweep to hole out in the deep.

Jadeja then produced a moment of brilliance to affect the run out of Mohammad Mithun, reducing Bangladesh to 151 for 5. In what should have ideally been the period to set a platform for a final flourish, overs 31-40 was instead a damage control phase as Bangladesh managed only 31 runs. To complicate matters further for Bangladesh, Liton was out stumped off Kuldeep in what was a marginal call from the third umpire, leaving the lower order to muster as many as possible in the death overs. Without the luxury of wickets in hand, Soumya Sarkar couldn’t do much other than trying and batting out the remaining overs. But without much help from the other end, Bangladesh’s innings didn’t even last for 50 overs.

Rohit Sharma and Shikhar Dhawan, rested for the previous game, continued from where they left off against Pakistan as they oozed positivity right from the outset. With five fours and a six (by Rohit) between them in the first five overs, the Indian openers were dictating terms until Dhawan’s attempt to take on Nazmul Islam resulted in a catch to mid-off, followed shortly by Ambati Rayudu’s dismissal. Despite the wickets, Dinesh Karthik struggling at one end, and a mix-up almost resulting in a run out, Rohit didn’t shy away from taking on the short deliveries as he scored a six apiece off Mustafizur Rahman and Rubel Hossain. But he attempted one too many – tempted into a pull by Rubel – to depart for 48.

Rohit’s dismissal resulted in a lull period for India, with Dhoni taking his time to get a feel of things and Karthik also being watchful at the other end. Having gone more than six overs without a boundary, the pressure-release shot came through a freebie offered from Nazmul – a short delivery that Karthik ensured maximum yield. Having scored only six off his first 22 deliveries, fierce drives off Mustafizur and Mehidy helped Dhoni add a couple of boundaries to his account as India didn’t let the required rate climb. A half-century partnership ensued before Mahmudullah created an avenue for Bangladesh by trapping Karthik in front with a low full toss.

With an assured Dhoni at the crease and Jadhav starting off in a promising fashion, India were moving along comfortably. However, Jadhav’s right hamstring problem set in motion events that resulted in intense discussions in the Indian change room. With Jadhav unable to run the quick singles, Dhoni tried to get a move on but he ended up slashing a Mustafizur delivery to the ‘keeper to depart for a 67-ball 36. With Jadhav continuing to be hampered by his injury and not finding the boundary, the Indian management decided it was prudent that he retired hurt and allow a fresh set of legs in Bhuvneshwar Kumar to partner Ravindra Jadeja. During this time, Bangladesh added to the pressure by bowling plenty of dot deliveries and the outcome of these events meant that the required rate went up over five.

As was expected, with the departure of Jadhav, Jadeja and Bhuvneshwar got busy with their running between the wickets and concentrated on finding the gaps on the field rather than attempting anything lavish. From 51 off the last 10 overs, the equation came down to 26 off five as Jadeja and Bhuvneshwar handled the situation wisely. An eight-run over off Nazmul and six off Mahmudullah kept the required rate under control before Bhuvneshwar executed a straight six off Rubel and a four down the leg side off Mustafizur to ease the nerves in the Indian camp. Jadeja’s attempt to slash at a Rubel delivery was unproductive and unwanted as India lost their sixth wicket, bringing Jadhav out to the crease again, and Mustafizur spiced up the finish by accounting for Bhuvneshwar and conceding only three in the penultimate over.

With six needed in the last over, Bangladesh tried to pull out a rabbit by asking Soumya Sarkar to bowl before deciding to go with Mahmudullah. Kuldeep Yadav, who was on strike, managed a single off the first delivery, followed by a single to Jadhav and a couple by Kuldeep. A dot raised the possibility of a Super Over but Jadhav, who was back on strike for the last ball with a single required, managed to sneak a leg bye.