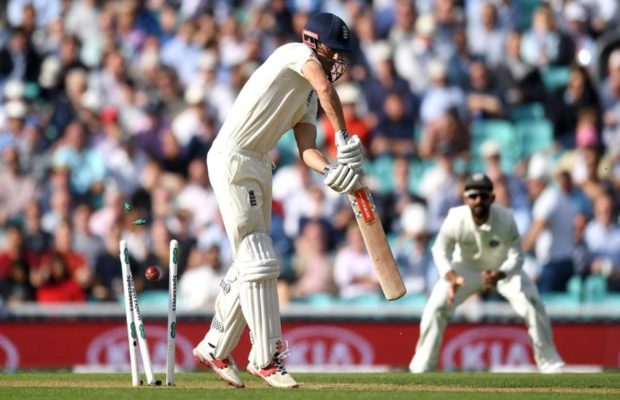 The 5th and final test of the series began yesterday with England winning the toss and opting to bat. Cook, playing his last match for England, finally had a good innings after a quite some disappointing knocks. England started of good, looking all ready to make a nice total until just after the tea break.

In the final session of days play, England were 123/1 and then came the crucial wicket of Alastair Cook, who scored 71 runs in 190 balls and was looking confident but one wrong decision of playing a ball which Cook could have very well left, he misjudged the ball getting a thick inside edge and the ball hitting the middle stump. Bumrah seemed delighted after getting the opener out and in the same over he got Joe Root for a duck.

After Cook’s wicket, the England team seemed to have lost the flair and the English batsmen fell to India’s ruthless pace attack like a deck of cards. After Root, Bairstow followed his footsteps and got out for a duck too. The other batsmen in line didn’t prove to be of much help to England as they also could not face the outrageous bowling attack by the Indian pace bowlers.

From 123/1 at tea to 181/7 in just the last session speaks for itself about the determination of the Indian team to not let the match out of their hands, which very well could have been the case if the pace bowlers would not have stepped up at the right time.

The day ended with England managing to get a total of 198/7 at stumps. Things can still turn around as England’s lower batting order have been seen to score quite a few runs in the past tests. All will be answered on Day 2 of this final test.