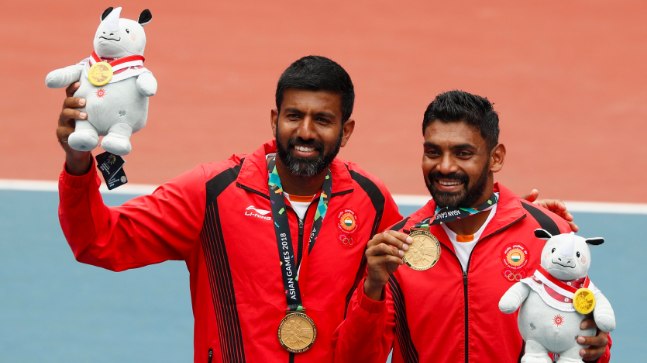 The 2018 Asian Games kicked off on 18th August in Indonesia and India’s 524-athlete contingent has been doing pretty well thus far. While most of the top stars didn’t have favourable results, the ones least expected to win have been successful, with India now having a total of 6 gold medals so far.

Today, India added 2 more gold medals to their 2018 Asian Games tally, becoming the first time they won two gold medals on a single day. The day begun with India’s rowing team winning gold, becoming only the second time in the history of the Asian Games that India have won a gold medal in rowing.

The team consisted of Sawarn Singh, Dattu Bhokanal, Om Prakash and Sukhmeet Singh, who will all be hailed as champions in the country now. They recorded a time of 6:17.13 in the Quadruple Sculls Event, to bring home the piece of yellow metal. You may soon see an increased importance given to the sport of rowing in our country.

After this the focus turned to Tennis, where Rohan Bopanna and his partner Divij Sharan scored gold for India. Yesterday, they entered the semi-finals and a bronze was assured, as both losing semi-finalists win bronze at the Asian Games. However, they went on to win both their remaining games, with eyes only for the gold.

Now these two are more known that the rowers and they were also the top seeded pair in the Men’s Doubles competition. In the final, they defeated Kazakhstan’s Alexander Bublik and Denis Yevseyev to win India’s second gold medal of the day and their sixth overall. This also became India’s fifth overall gold medal in Tennis Men’s Doubles, in their Asian Games history.

Keep reading GutshotMagazine.com for more updates on the 2018 Asian Games.