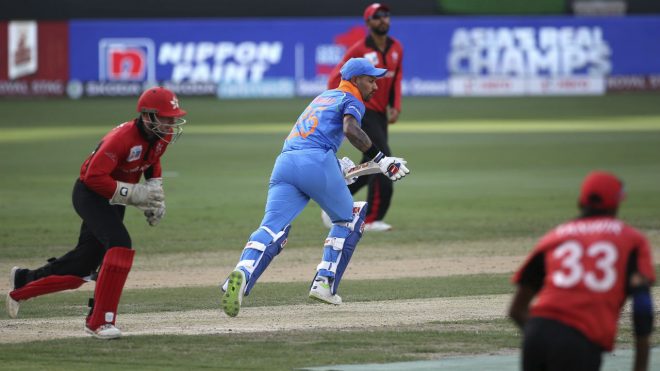 India faced Hong Kong in what turned out to be the latter’s final match in this year’s Asia Cup. Anshuman Rath, won the toss and opted to bowl first for HK. The Indian openers, Rohit Sharma and Shikhar Dhawan came out to bat and the duo started off decently but the skipper lost his wicket to Ehsan Khan in the 8th over of the innings after adding 23 runs to the scorecard. Dhawan was accompanied by Ambati Rayudu and both the batsmen gave India just what they needed – a solid partnership.

They managed to add 116 runs together as both batsmen reached the 50-run mark respectively whilst on the crease together. Rayudu lost his wicket in the 30th over but Dhawan managed to get to his 14th ODI ton as he, along with Dinesh Karthik managed to tally up 79 runs on the board together before Dhawan fell for 127 at the hands of Kinchit Shah in the 41st over.

India looked in control despite losing a few wickets with the run rate of around 6 runs per over but this is when the tides changed in favour of Hong Kong as India’s middle collapsed with MS Dhoni getting out for a duck and Karthik following. India managed to get a total of only 285 on the board at the end of the innings when 330 was not looking tough for them.

Hong Kong came out top bat knowing that 285 was a doable target. The openers were headstrong as Nizakat Khan and Anshuman Rath racked up a record opening partnership of 174 runs for their side before the skipper, Rath was compromised at the hands of Kuldeep Yadav in the 35th over.  He managed to contribute 73 runs to add to the tally. Soon in the next over, Nizakat also lost his wicket scoring 92 runs.

Till this point it seemed like Hong Kong could actually upset India as the Indian side never looked in control until the 40th over of the 1st innings but this was the point where it the tables turned for the final time in the game as India, even though the middle order put up a fight by giving it everything, were able to defend the 286-run target with wickets in quick intervals and keeping up some pressure on their opponents.

Post-match, the Hong Kong skipper said, “I think today was bitter-sweet. We really proved to the world what we can do. In saying that, we had India by the horns and really should’ve finished it off, if we are being hard on ourselves, which we should be. We don’t know what the ICC has in plan for us. Hopefully, this performance helps. The next 3 or 4 years will be a little bit quiet for us, going into a little bit of a rebuild period. But hopefully ICC recognise that associate cricket has got a lot better and today we just proved that.”

Shikhar Dhawan was awarded MoM for his brilliant performance with the bat. He had a few words to say during the post-match ceremony. He said, “I was doing my process and was working hard. I was being patient. I knew that runs gonna come and had the belief in my process. I was not taking extra risk today and was just playing on the merit of the ball. My intent was always positive. They were bowling in the right areas as well. One of their bowlers was not very quick but he landed it in right areas on a pitch where the ball was coming slowly on to the bat.”