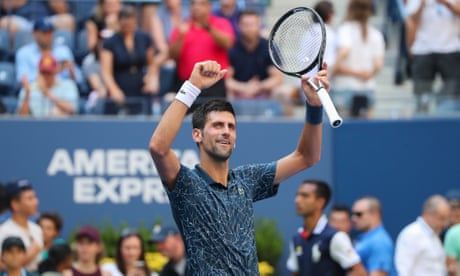 Djokovic steers past Millman in US Open quarters

Yesterday marked Day 10 of this year’s US Open and two Men’s Singles quarter-finals were played, sending two players to the semis. John Millman, the Aussie who upset 2nd seed Roger Federer and knocked him out, was all set to face 7th seed Novak Djokovic. The pair squared off in the Serbian’s 11th quarterfinal of the US open and though the match ended in a routine looking score line, 6-3 | 6-4 | 6-4 in the Serb’s favour, Millman was not going down without a fight as the score line didn’t illustrate the hard-fought nature of the game. Millman looked to be gaining the upper hand early in the second set as the humid New York conditions took their toll.

The Aussie was well in the match in the second set until he took a near 10-minute break, with the chair umpire’s approval, to get a change of clothes away from the court as he was sweating bit too much. This break in the match was a blessing in disguise for the worn-out Djokovic. He, while Millman was away getting a change, took the much-needed rest by sitting shirtless courtside.

Millman might regret taking a break at such a crucial spot in the match where he was gaining momentum and lost it after the break as Novak got just what he needed to see through the rest of the match with ease. With this win, Novak Djokovic maintains his perfect record in the US Open quarter finals to 11 wins and 0 losses.

Djokovic paid respect to Millman in his post-match interview, admitting he was struggling to hold off the Aussie at different moments. He said, “Credit to John for putting up a great battle, He’s a great fighter. He’s had an amazing tournament, it’s his first quarter-final. He deserves a round of applause definitely.”

The other Men’s Singles quarter finals that was played was between Kei Nishikori and Marin Cilic and it turned out to be an amazing display of tennis by the two players, where the 7th seeded Croatian M. Cilic tasted defeat at the hands of the player he beat in straight sets in the finals of US Open 2014, in a 5 Set showdown. Nishikori earned his revenge, having missed the previous year’s US Open with a wrist injury he sustained 2 weeks prior to last year’s tournament. This 5 Set rampage match was a roller coaster ride which ended 2-6 | 6-4 | 7-6(5) | 4-6 | 6-4 and got people sitting at the edge of their seats as both players gave in their best, given the sunny and hot conditions. This win takes Nishikori to the third semi-final of the season.