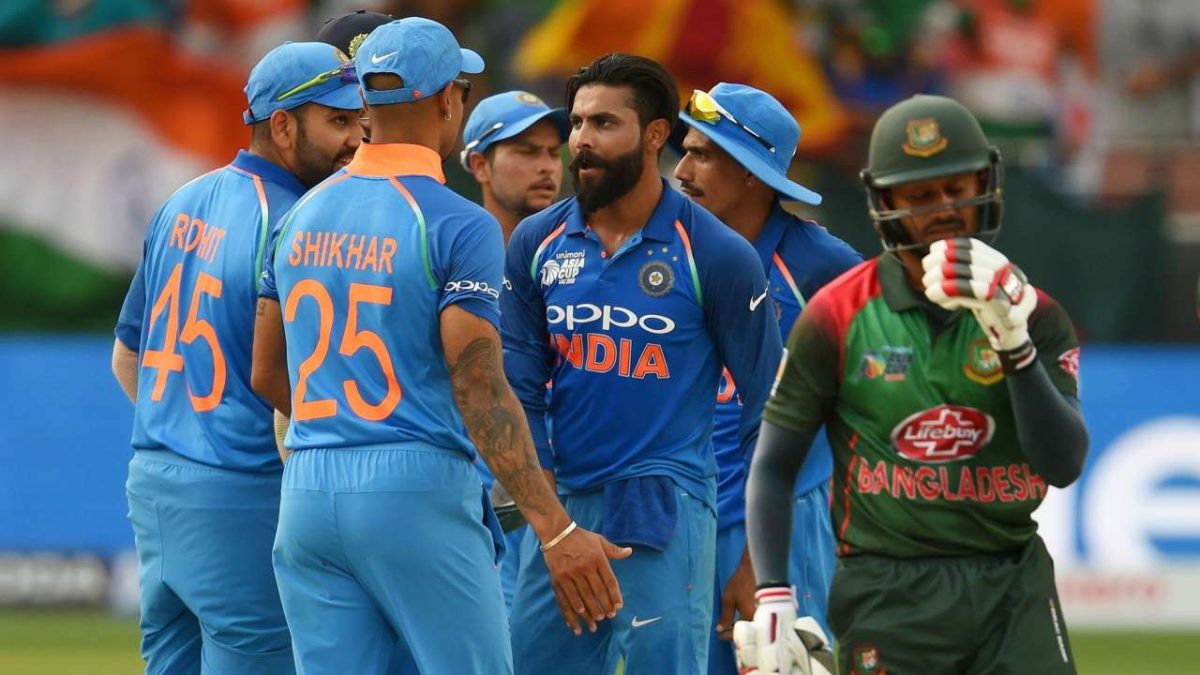 India faced off against Bangladesh in the opening game of the Super Four stage at the Dubai International Cricket Stadium. Ravindra Jadeja, playing his first match since July 2017, displayed an outstanding performance and marked his comeback as one of the most sensational returns. India won the toss and opted to field and let Bangladesh set a target, which turned out to the right decision.

Bangladesh came out to bat and after a disciplined start, lost their wickets in order to try and pace things up on sluggish wicket. By  the end of the 6th over both the openers had left the crease and headed back to the stands. Jadeja was introduced into the attack in an eventful 10th over, with the bowler over-stepping, a dead ball being called, and being struck for a couple of boundaries before Shakib got carried away and became the left-arm spinner’s first scalp. Jadeja then trapped Mohammad Mithun in front and followed it up with the wicket of Mushfiqur Rahim, whose attempt to reverse sweep fell flat.

A 36-run association between Mahmudullah and Mosaddek Hossain began Bangladesh’s rearguard effort, although it came at a strike-rate of just over 40. A poor leg-before call caught Mahmudullah by surprise and with Mithun already having consumed the review earlier, the No. 6 bat had to walk back disappointed. Already having taken three wickets, Jadeja bagged his fourth in the last over of his allotted 10 to mark his comeback. While the Indians would have looked to clean up Bangladesh’s lower order quickly, that wasn’t to be as Mehidy led a spirited fightback with a 66-run eighth-wicket stand with Mortaza. Both batsmen hit two sixes apiece before Bangladesh’s innings came to an end with five deliveries remaining and the score card reading 173 all out.

Indian batsmen came out to chase a mere total 174 runs and unlike the opponents, right from the start, openers hit the straps straight away with a flurry of boundaries. Rohit started with a crisp drive through cover off Mashrafe Mortaza before Dhawan imposed his authority with two back-to-back fours off the Bangladesh skipper. Sharma took the book seat and let Dhawan drive India to victory with all the attacking and hitting he had been doing. Having scored a 50 run partnership by the 10th over, the Indian openers were marching to victory before Dhawan lost his wicket to Shakib Al Hasan. After denying Dhawan a review, Sharma took charge of the aggressor and stated a good mix of boundaries and singles to keep the runs coming and racked up a half century.

A 45-run second-wicket partnership, in which Ambati Rayudu played second fiddle, came to an end when he got an inside edge off Rubel Hossain – a review from Bangladesh confirming the same. Sharma kept on going and M.S. Dhoni, came out to bat after Rayadu, provided solid support. The wicketkeeper-batsman had his share of the fun when he slapped a couple of Mortaza deliveries through cover and back over the bowler’s head for fours. Looking to finish things off in style, with India four away from the target, Dhoni was caught at deep cover off Mortaza, which meant that Rohit and Dinesh Karthik had to complete the formalities. Man of the Match: Ravindra Jadeja.