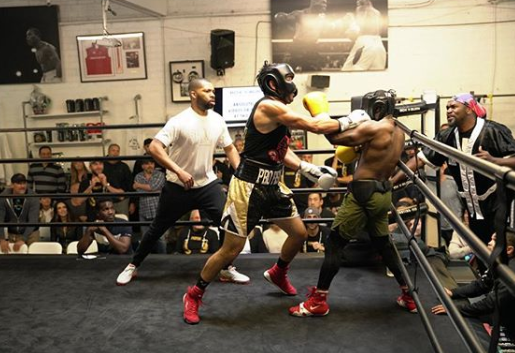 It was nearly a year back that poker pro Antonio Esfandiari announced the possibility of there being a boxing match between himself and Hollywood actor/comedian Kevin Hart. We all liked the idea but the chances of it really happening were slim. However, it happened, and you will be shocked with the outcome.

Originally, the bout was supposed to be in March this year as per a TMZ report last year. “I’m taller than him, and probably have 35-40 pounds on him. But there’s also a reason I got 35:1 odds. He’s a natural athlete, he’s in incredible shape, and he’s been boxing for a long time. He’s a beast,” said Esfandiari, accepting that he was a major underdog.

However, it was a major surprise as Esfandiari walked out of the ring as a champion, winning a decision over the course of the three, three-minute rounds. The 40-year old and 3-time WSOP bracelet winner is said to have won his amount of money at odds of 35:1, but the amount is yet to be disclosed.

Hart is more experienced with boxing and was a favourite, and while congratulating the poker pro for his victory, Hart has also asked for a re-match soon. He posted a photo to Instagram with a caption that included, “I wanna take the time to congratulate my guy Antonio Esfandiari on a amazing sparring match today. We went 3 3min rounds and both gave it our all. In the end you were the winner by decision. You worked hard and deserve the W champ. Good shit….I want a rematch as soon as I catch my fucking breathe again….”

Videos and photos of the game will soon be up, once Hart has them ‘edited’. Until then, keep following GutshotMagazine.com for similar news on poker and poker player prop bets from across the world.