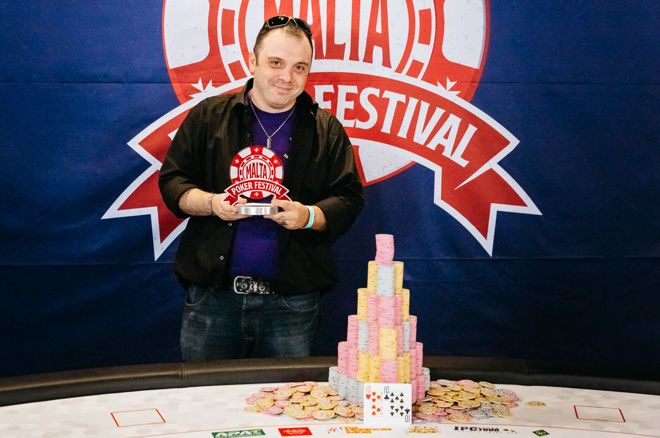 
The €550 Grand Event (Main Event) of the Malta Poker Festival kicked off a few days back, with a massive field of 1,366 entries registering to the tournament after three days of starting flights. The field quickly narrowed down over Day 2 and Day 3 of play, where we reported Fabian Gumz leading the final 8 players.

This was the inaugural Malta Poker Festival Grand Event, and everyone would’ve wanted to end as the winner, not only for the €150k top prize, but also because the winner’s name would go down in history. And this winner took less than seven hours on the final day to knock out everyone else and be crowned champion.

Italy’s Emanuele Onnis was second in chip counts to Gumz at the end of Day 3 and it was only fitting that these two also made it to heads-up together. However, Onnis managed to outlast his opponent in heads-up, shipping the tournament and walking away with the biggest pay-check of €150,000 for first-place.

The massive participation ensured that the €500,000 guarantee was crushed with the prize pool being inflated to €662,510, from which Onnis was the biggest beneficiary. This was a huge victory for the player and his largest live cash by a long, long way, with his previous best being just €5,800.

Just a week before this could end, there was also the MPN Poker Tour Battle of Malta Main Event that took place in Malta, and that was shipped by Julien Stropoli after a 5-way deal. Keep reading GutshotMagazine.com for more updates on Malta poker tournaments, as well as those from other parts of the world.