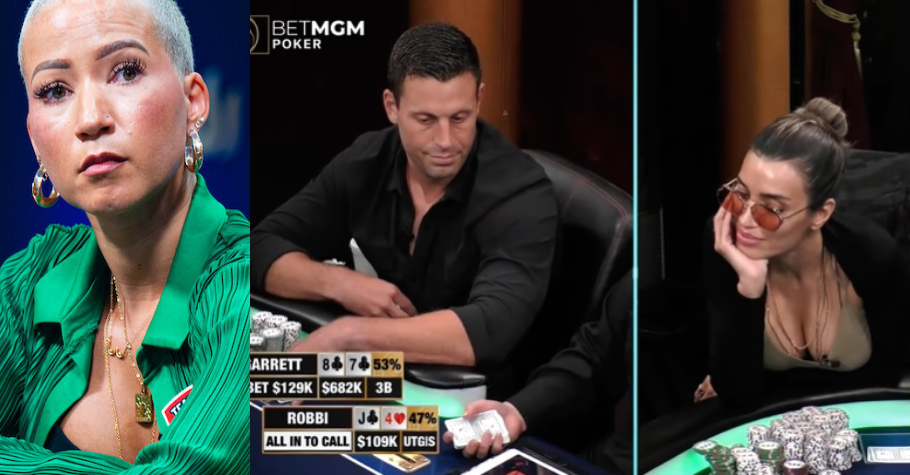 
And she does it again! Sharing a long Twitter thread about a burning issue is right up Ebony Kenney’s alley. She’s done that in the past (when she took a dig at Daniel Negreanu) and now when the Robbi Lew-Garrett Adelstein cheating scandal broke the internet. Kenney took to her Twitter handle and wrote a bunch of posts explaining her take on the matter. But this take soon turned into a nightmare when she threw misogyny and sexism into the narrative. And this did not end well for the female pro as she got brutally trolled by Twitterati for being biased.

Not sure about the basis of the Kenney’s dig at Lew, but she clearly felt that Lew-Adelstein drama had nothing to do with ‘Lew being a woman.’ Kenney, who recently made headlines for her performance at the Triton Poker series, got boatloads of wrath for her twisted take on the matter. The Austin resident threw shade at Lew without proper investigation or analysis of how she’s played the game so far.

However, a lot of people are creating these binary buckets about @GmanPoker reaction, as if he only reacted this way because @RobbiJadeLew is a woman.

That the underlying sentiment of his reaction is rooted in misogyny & sexism.

Kenney specifically mentions in her Twitter post that people talking about misogyny and sexism in the Lew-Adelstein saga were wrong and that she disagrees on that point. Without providing a thorough analysis of Lew’s play (past and present), Kenney paints it as suspicious and goes on to term her J4o hero call as unorthodox (punishing someone for unorthodox play?). Kenney’s statement had major loopholes and Twitterati saw right through it and trolled her brutally.

Many pros have shared their respective opinions on Twitter, but Kenney got it terribly wrong and along came the trolling. If Kenney was trying to match up to Doug Polk in blaming Lew then she’s far behind. Polk even published a video on his YouTube channel in a bid to defend Adelstein and confirm Lew’s cheating but Kenney’s effort to do the same failed miserable if the comments on her post are anything to go by.

Did you Review every Hand that Robbi has Played in her Poker History? Because EVERYONE that had Played with Her In Tournaments & Recreationally is Saying that This IS IN FACT EXACTLY How She Plays!

@GmanPoker showed he really have no class and was just covering it up with wins. A loss will always expose your true character.

You’ve never stayed pretty silent on anything. There’s always a 1 / ♾ coming behind each post.

I don’t think he would ever ask a man for money back. Also I never seen a man in poker feel bad for winning with a bad hand. I won most of the biggest pots in my life with a hand most would consider a bad hand.

Here we go again… Everything is sexist lmao

This is not a gender issue Ebony… Wtf are you talking about !?

Many users who commented on Kenney’s Twitter post wanted to know what she was basing her opinion on. Some even called her out on her so-called take on the cheating scandal. Kenney’s post and the user comments that followed looked like the female pro threw caution to the wind and paid a hefty price for it.