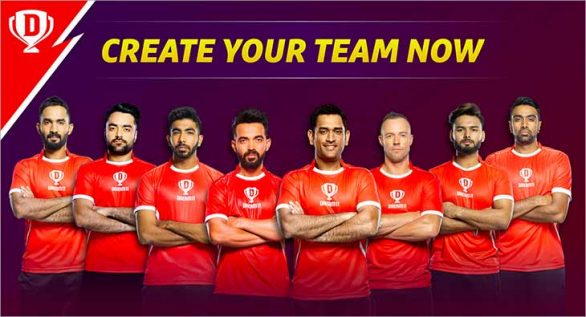 
If you held a survey asking who leads the fantasy sports sector, the unanimous answer would be ‘Dream11’. Even the numbers say so. The company is by far in the numero uno position in this industry in India and no one even comes close. In a recent development, Dream11 has partnered with 7 Indian Premier League (IPL) teams and one player from each of those teams for this season.

Dream11 was already associated with MS Dhoni, captain of Chennai Super Kings and Dream11’s brand ambassador since March 2018 and has completed more than a year with Dream11 since then. Now, along with Dhoni the company has signed additional players who are as follows –

Vikrant Mudaliar, Dream11 CMO said, “This IPL season, we have come out with a holistic approach to our marketing campaign that comprises of brand advertising films along with product led content on several platforms. The newly signed cricket stars along with our deals with the IPL franchise teams means that we are bringing alive the IPL experience in a unique way for Dream11 fans.”

Dream11 has already created TV and digital content featuring these 7 cricketers. This is expected to amplify users’ interest for the next day’s fantasy cricket action. They have also started ‘Ye Game Hai Mahaan’ campaign across various social media channels.

Audience present at the multiple IPL 2019 venues also have the chance to play an in-match quiz called ‘Dream11 Game Changing Quiz’. The winner of the quiz will then get to enjoy the IPL Hospitality experience. He/she will also be awarding the ‘Dream11 GameChanger of the Match’ to the player who’s been selected for this award.

Dream11 is also IPL’s ‘Official Partner’ for the next 4 years, having signed an agreement this month. It may also become India’s first $1 billion gaming company. It recently signed up with ICC, Big Bash League and FIH. The partnership with ICC means Dream11 will be covering all its matches including the upcoming World Cup.

The company also recently crossed the 5 Crore-user mark and is growing rapidly. Keep reading GutshotMagazine.com for more such fantasy sports industry updates and for general gaming news from around the world.