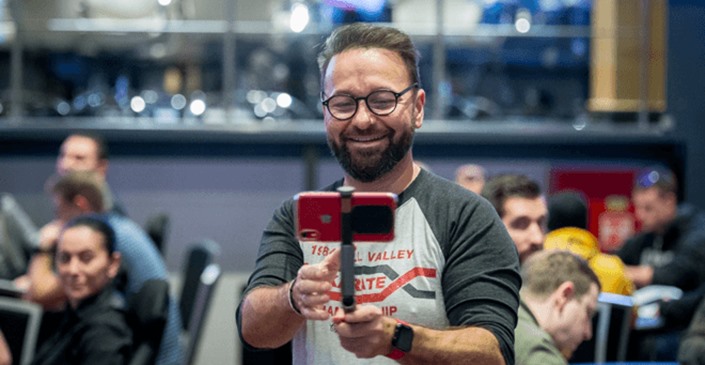 
The six-time bracelet winner and well-known for his YouTube channel and training portal MasterClass, Daniel Negreanu tweeted that he is never taking up the re-buy option in any poker tournament again. Currently making deep runs in the World Series of Poker Europe (WSOPE), he stated that he is considering only one bullet in future tournaments.

Accumulating total live earnings of over $42 million, Negreanu has been quite a sensation in poker industry this year, from securing massive live flows of cash to tying the knot with former PokerNews host Amanda Leatherman after rekindling their love in 2018.

The high-stakes player sits at 1st in Canada’s All-Time money list, and recently announced in his twitter handle, “After this WSOPE, I’m strongly considering playing only one bullet in any re-entry tournament. By going in with a mindset that you only get one shot, I think it can have a positive effect on your play. Too often me, and others make negative decisions in re-entry.”

The rebuys in any tournament are thought to build the biggest stack while pressurizing the smaller stack players. Surely, the overall prize pool increases, considering re-buys in any event. What would be more fascinating is to see the top player’s records and the buy-ins they chip in. The complication lies when one views the total amount won, the player crushing the game remains cloaked, and this confuses the entire thought process. Negreanu tweets, “I wish TheHendonMob showed how many bullets were fired for each person on the cash list. There would be a lot of poker players that wouldn’t look as impressive.”

No wonder, the topic is highly debatable. New York poker pro Scott Seiver expressed, “It’s almost like re-entry is good for the casinos, good for the players, and bad for the media crafted narrative about prestige in a game that people play for money, not glory. Weird how it works that way.”

For latest updates on poker news and industry around the world keep reading GutshotMagazine.com and stay tuned!