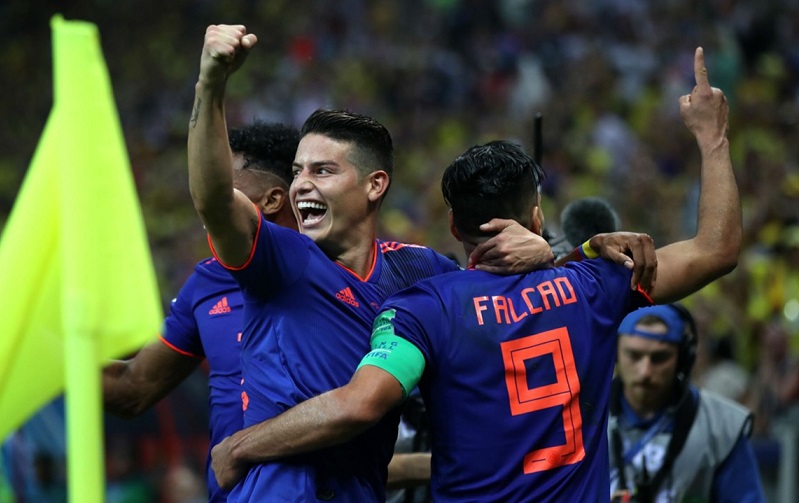 Colombia win puts Poland out of the tournament


The Colombian manager had a huge dilemma of whether to play James Rodríguez or Juan Quintero as his main striker. However, they came up with the perfect solution of playing both and Colombia ended up recording a 3-0 victory over Poland, keeping their chances in the tournament alive.

“They are two players with extraordinary talent. Tonight, they contributed these great talents and played in a very complementary fashion,” said manager José Pékerman about his two star forwards. On the other hand, Poland will bow out of the tournament, having recorded two losses in two games so far.

None of them scored, but they created enough chances to let their teammates score and register a 3-0 win. Rodríguez delivered a perfect cross into the box in the 40th minute and Yerry Mina headed it in, to begin the scoring for Colombia. Quintero then provided the next assist, making a pass to Radamel Falcao, who beat the keeper easily and took Colombia 2-0 up in the 70th minute.

5 minutes later, Rodríguez was in action once again, providing an assist to Juan Cuadrado, who made an open run before beating the keeper and finding the right corner of the net. Colombia went 3-0 up and they’ve kept their hopes alive in this tournament, proving that they are good enough to go deep in the World Cup.

A couple of more shots on goal were made by Colombia, but the scoreboard stayed the same at the full-time whistle. Rodríguez now has 6 goals and 4 assists since the 2014 World Cup –  the most goals and assists by any player since that last World Cup in Brazil. Poland on the other hand became the first European nation to be knocked out. Full match highlights:

Colombia now have 3 points from 2 games, with Senegal and Japan at 4 points each on the top of the table. Can they make it to the knockouts? Keep reading GutshotMagazine.com to get daily FIFA 2018 World Cup updates.