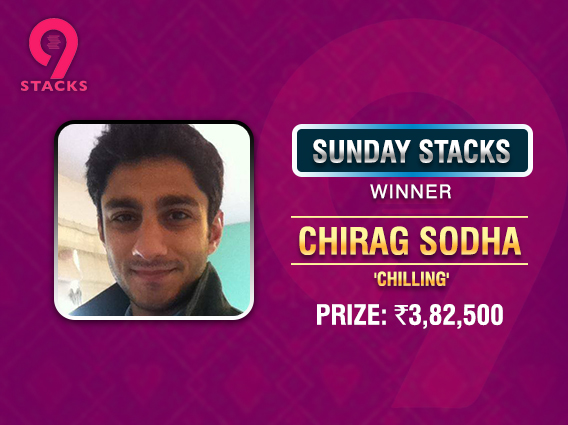 
9stacks is a company among the Indian online poker community that is gaining steam entering 2019. It is one of the companies that has received major funding initially and has used its big budget to concoct many exciting series and tournaments on its platform, which sees sizeable fields regularly.

Along with hosting daily feature tournaments simply called Stacks, they are also hosting the ‘Prime Time Leaderboard Challenge’, which will run till 30th December. Yesterday also saw one of the highlights of the week, INR 15 Lakhs GTD Sunday Stacks in the books.

Last night’s tournament saw a total of 197 entries (62 re-buys) coughing up the buy-in of INR 5,500. The tournament began at 5 pm yesterday on 9stacks and ran till 1:54 am today morning. Top 25 places were paid for the tournament with minimum cash being INR 13.5K. The winner to emerge from the almost 10-hour grind was a known player Chirag Sodha aka ‘chilling’. He took home the Sunday Stacks title and the 1st place cash prize of INR 3,82,500 for his victory.

Sodha beat another regular in heads-up, Haresh Kukreja aka ‘dietchips’. Kukreja took home a sizeable amount of INR 2,62,500 for finishing 2nd in this tournament. Along with his runner-up finish on 9stacks, Kukreja also won last week’s Sunday Stacks for INR 3,82,500.

Sodha is a fairly known player in the online circuit, but he also has recorded live cash outs at Goa since 2017. He also finished 6th at the Baadshah Gaming Live Main Event (April ’18) hosted at the Casino Pride, Goa, taking home INR 2,20,000. This win is will be a major addition to his career and will boost his bankroll to be able to play in more upcoming tournaments and he’ll be looking forward to cash out big too, with the Christmas season having begun.

Keep reading GutshotMagazine.com for more tournament announcements, promotions and general poker news from around the world.