PokerStars LIVE is hosting their 2018 Red Dragon festival at Jeju, South Korea. The festival kicked off with a bang on Nov 30. There have been numerous events concluded since the time it started, and it will go on till Dec 9, making it a 10-day affair.

Till now, the series saw several events ending on a successful note. The Jeju Red Dragon Megastack event saw India’s Sumit Sapra participate and cash out at 16th place with ~INR 1.26 Lakhs. The Baby Dragon event was shipped by James Won Lee, and the Super High Roller was shipped by the Frenchman Romain Arnaud.

Some notables who got eliminated before the bubble-burst were Michael Soyza, Shan Huang, Chen An Lin and James Won Lee.

The bubble was delivered by the champion himself, in a three-way hand that saw Mikael Andersson and Yuan Li getting wounded. Li flopped a flush draw for the main pot and a flush draw plus an over for the side pot.  His stack was looking like an NYC skyscraper after the win.

The final hand of the day saw the eventual runners-up Huahuan Feng, the chip leader entering the day, against Li. Feng was packing his superior Ac 8c against Li’s Ad 3h, but Li managed to hit one of his three outs on the 2c 3d 2h 5s 6c board and took down the title, trophy and the cash prize. Feng also took home a sizeable amount of KRW 198,060,000 (~INR 1.25 Crores) for his deep run. 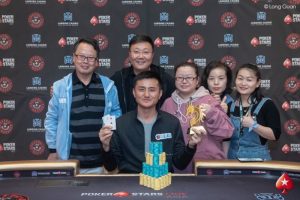 Li spoke about his fantastic win, saying “I feel excellent! I knew I was going to win when there were 40 players left and I won a huge three-way pot with pocket kings after turning a set against Baby Dragon Champion Jimmy Lee who had aces, and another player with pocket sevens”

This is Li’s second title and the biggest score of his career, spanning the last six or seven years. We hope that Lady Luck and the Poker Gods be with him till the end.