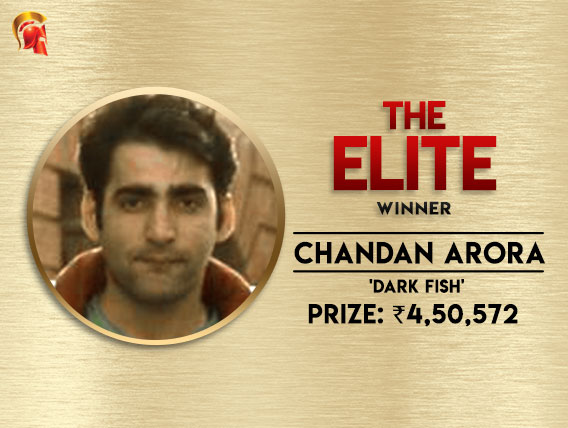 Chandan Arora walks away with Elite victory on Spartan


The Spartan Poker hosts a number of featured tournaments throughout the week on their platform and each one is unique in terms of its offerings. As for Friday nights, The Elite INR 18 Lakh GTD is hosted at 7:30pm, which, as the name suggests, is one for the elite group of the online poker community.

Most people tend to shy away from high buy-ins but here, every entry has a buy-in of INR 11,000 and yesterday, the guarantee of this 6-Max tournament was smashed. With 162 unique players participating, it was a long and tough grind for everyone who made it to the money.

Yesterday, it was one of the circuit regulars who emerged victorious, kicking off his weekend on a fabulous note. Chandan Arora aka ‘Dark fish’ had a tough time with a large numbers of pros in the field, but he managed to take down the title, after striking a deal with his heads-up opponent, ‘Saumya’.

The result was that Arora managed to stay slightly ahead and was adjudged winner due to a greater chip stack. He took home the mammoth top prize of INR 4,50,572, while Saumya settled for the runner-up position but an almost equal 2nd place prize of INR 4,42,528.

When contacted by Gutshot, Arora said, “6-Max is a preferred format for most regs including me. And the cherry on the top was the structure which ensured that it was never a shove fest especially in the later stages of the game. Getting an opportunity to play your game pre and post is a sought-after variable for any decent player. Elite actually lived up to its name. Cheers.”

Such major tournaments keep happening through the year and we at GutshotMagazine.com are dedicated to bringing to you all such roundups and reports from the biggest poker tournaments in India, so stay tuned.