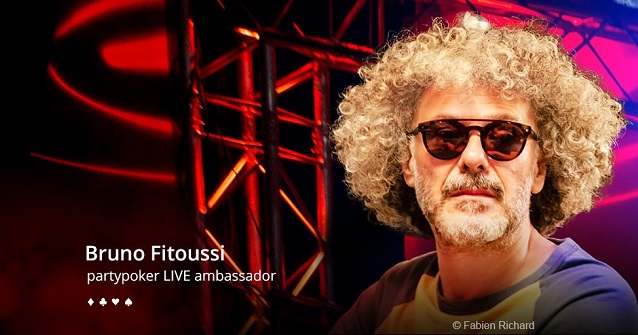 
As a part of their continuous efforts to become the top poker company in the world, partypoker has added several top poker pros as ambassadors in the last 8-10 months. In addition to that, they’ve multiplied their guarantees and increased the number of stops on the partypoker LIVE schedule. Clearly, they’re making giant strides towards becoming one of the best.

The latest to join the partypoker LIVE team as a brand ambassador is French poker pro, Bruno Fitoussi, also known as the ‘King’. Fitoussi is an active player in top live tournaments around the world, with nearly $3 million in live poker cashes and three cashes in the recent WSOP 2018 series as well.

Remember, they signed poker pro Ludovic Geilich just around 10 days back and with Fitoussi joining them, they are adding over 30 years of poker experience to the team. Fitoussi will join Bertrand ‘ElkY’ Grospellier on the French partypoker ambassador team, with the latter being signed in April this year.

Fitoussi is a very well-respected name in the French poker industry, often being credited as the man who brought poker to France. He has also been nominated to the prestigious Poker Hall of Fame on four separate occasions. Apart from playing, he has been a commentator for hundreds of poker tournaments on TV shows across Europe.

“I am thrilled to join the partypoker LIVE team – partypoker has always held a special place in my heart, so to be working with them is a great privilege for me. I have a vast wealth of industry experience that I am excited to share, and I look forward to getting involved with all aspects of the business,” Fitoussi said about his latest assignment with partypoker.

The company is indeed trying its best to establish itself as the top brand in live and online poker, with plenty of live tournaments to look forward to in the next few months, like the partypoker LIVE MILLIONS Russia at Sochi, the Irish Poker Masters, and the exciting Caribbean Poker Party as well.

Keep reading GutshotMagazine.com for similar updates on partypoker and other major poker stories from around the world.