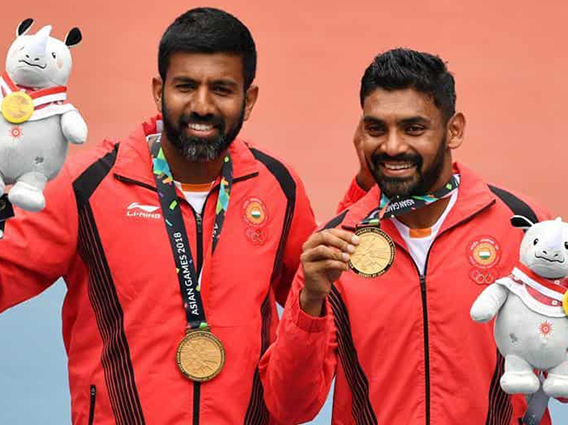 
The Indian men’s tennis pair of Rohan Bopanna-Divij Sharan outclassed Kazakhstan’s Aleksandar Bublik and Denis Yevseyv 6-3, 6-4 in the men’s doubles final to bag a gold medal in a match that lasted 52 minutes. Bopanna and Sharan added the sixth gold medal to the Indian contingent’s medal tally. India, now have a total of 22 medals in their kitty — consisting 6 gold, 4 silver and 12 bronze. Earlier in the semi-final, Rohan Bopanna and Sharan won 4-6, 6-3, 10-8 against Japan’s Kaito Uesugi and Sho Shimabukoro in a three-set thriller which lasted for 72 minutes.

In the quarterfinals, which also went to three sets, Bopanna and Sharan edged past Chinese Taipei’s Yang Tsung-Hua and Hsieh Chengpeng 6-3, 5-7, 10-1 in 76 minutes.

The pair of Rohan Bopanna-Divij Sharan displayed their superiority in the Round of 16 as they overcame Thailand’s Wishaya Trongcharoenchaikul and Nuttanon Kadchapanan 6-3, 6-1 in straight games. The match had lasted for 54 minutes.

In the Round of 32, Bopanna and Sharan had eased past Indonesia’s Susanto Da and Susanto Ia defeating the 6-3, 6-3 in straight games in a match that lasted for 54 minutes.

It was a good day for India overall at Asian Games 2018. Tennis and rowing brought in two gold medals for India and three more medals were assured in squash. Heena Sidhu added to the tally with a bronze in 10m pistol. India thrashed Japan 8-0 in men’s hockey to be on top of Pool A. It was a disappointing day in kabaddi and badminton as India failed to deliver in those sports.