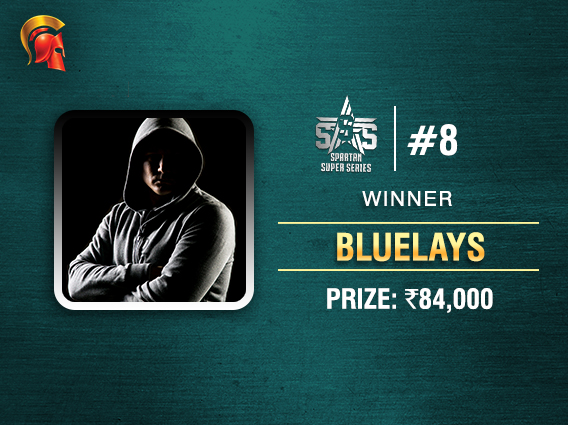 ‘BlueLays’ is the winner of SSS Event #8


What’s your favourite flavour of Lays? The classic yellow? Or the cream and onion green? Or is it the tangy tomato red? Regardless, the latest Spartan Super Series (SSS) winner on The Spartan Poker has made it very clear what his favourite flavour is – the masala blue flavour.

Yesterday was the second day of the SSS series and ‘BlueLays’ was crowned winner of the third tournament of the day – SSS Event #8 INR 4 Lakh GTD. With a buy-in of INR 880, a total field of 407 entries registered to the tournament and BlueLays emerged victorious from this field.

Only the top 30 players were paid out in the tournament, with a minimum cash prize of INR 3,000. However, BlueLays had eyes only for the top prize, and that’s what he got, winning INR 84,000 for finishing first. In second place was ‘QueenNine’ who was awarded INR 58,800 for the runner-up finish.

The end finally came in Level #42 of the tournament, with the blinds running at 16,000/32,000 – 4,000 and BlueLays having built a 5:1 chip lead over his/her opponent. BlueLays, trying to put pressure on the shorter stack, raised 48k pre-flop, which was called by QueenNine.

The Kd Qd 4h flop went check-check followed by a 68k bet on the 2s turn card, this time by QueenNine. The call was made and QueenNine shoved with the river card opening Kc. BlueLays made the call and revealed Qs 3d over QueenNine’s 9s 2c, winning with Kings and Nines over Kings and Twos.

BlueLays has had a few good finishes in the series so far and this win certainly helped, as he secured enough of points to end Day 2 at #3 on the SSS Leaderboard, where a total of INR 10 lakh will be given away in guaranteed prizes at the end of the series. Keep reading GutshotMagazine.com for more updates on the SSS series.