Craps is a dice game in which the players make wagers on the outcome of the roll, or a series of rolls, of a pair of dice. Players may wager money against each other or a bank while playing variants.

Craps developed in the United States from a simplification of the western European game of hazard. Hazard was brought from London to New Orleans in the year 1805. The name craps was derived from an underclass Louisiana mispronunciation of the word crabs, which in aristocratic London had been the designation for the numbers two and three. The game started to gain ground during World War II and after 1960 a few casinos in Europe, Australia, and Macau began offering craps. 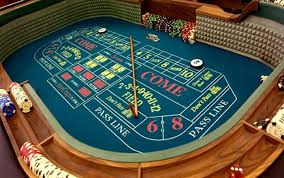 Each casino may set which bets are offered and different payouts for them. Players take turns rolling two dice and whoever is throwing the dice is called the “shooter”. Players can bet on the various options by placing chips on the marked sections of the layout, or asking the base dealer or stickman to do so, depending on which bet is being made.

Bank craps is a variation of the original craps game and is sometimes known as Las Vegas Craps. This variant is quite popular in gambling houses across Nevada , and its availability online has now made it a globally played game. Bank craps uses a special table layout and all bets must be made against the house. In Bank Craps, the dice are thrown over a wire or a string that is normally stretched a few inches from the table’s surface. The lowest house edge (for the pass/don’t pass) in this variation is around 1.4%.

Crapless craps, also known as Bastard Craps, is normally played as an online private game. In crapless craps the shooter (person throwing the dice) is at a greater disadvantage and has a house edge of 5.38%. Another difference is that this is one of the craps games in which a player can bet on rolling a 2, 3, 11 or 12 before a 7 is thrown.

New York Craps is played mostly in the Eastern coast of the US, true to its name. History states that this game was actually found and played in casinos in Yugoslavia, the UK and the Bahamas. In this craps variant, the house edge is greater than Las Vegas Craps or Bank craps. The table layout is different, and is called a double-end-dealer table. New York Craps Players bet on box numbers like 4, 5, 6, 8, 9 or 10.