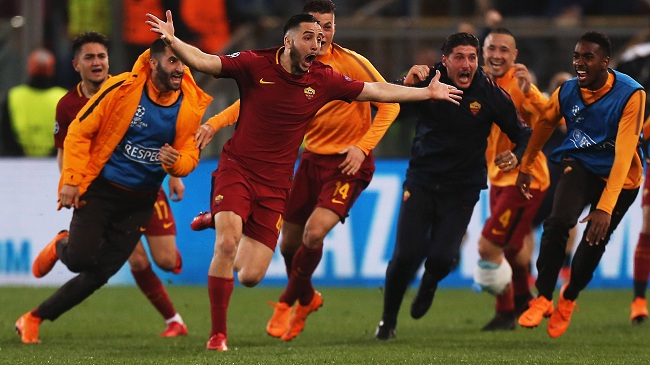 Liverpool shocked Manchester City last weekend, when they found the net thrice at home, to beat City 3-0. It was the 1st leg of the UEFA Champions League quarter finals and they then went to the Etihad Stadium for the 2nd leg, where all they had to do was avoid losing by a deficit of 3 goals.

The 2nd leg was played yesterday, where City scored within 3 minutes and the comeback was on! However, Roberto Firmino and Mohamed Salah scored for LFC in the 2nd half and ended the game 2-1. They won 5-1 on aggregate and qualified for the Champions League semi-finals, even though City had 20 shots compared to LFC’s 5, and City even enjoyed a massive chunk of the possession – 69%.

Most thought City would stage a comeback, but it didn’t happen. Keep reading to know which team really staged a comeback!

When playing against Barcelona, 99% of clubs around the world are staring at defeat. That’s what happened when Barcelona played Roma last week, with the former winning 4-1 at their home ground. It was just a matter of time and just a matter of playing 90 minutes of football before they proceeded to yet another Champions League semi-final.

However, this wasn’t to be! Roma scored thrice to finish 90 minutes at 3-0, and the aggregate at 4-4. Roma’s away goal in the last leg allowed them to book their spot in the semi-finals, after producing a historic comeback against the mighty Barcelona. Dzeko, de Rossi and Manolas scored goals that helped them miraculously advance in the Champions League!

Keep watching GutshotMagazine.com for regular updates on the rest of the 2017/18 UEFA Champions League!