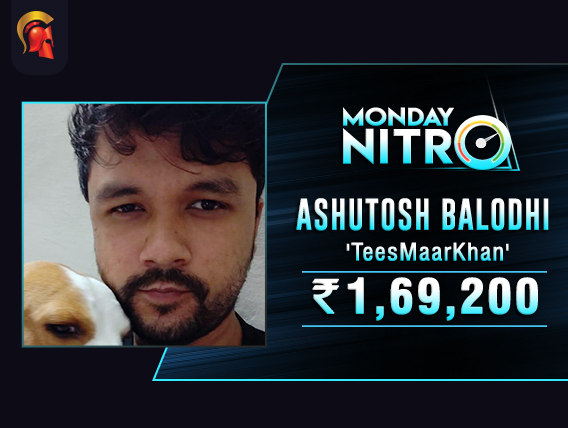 
Monday Nitro is one of Spartan Poker’s newer offerings, recently introduced in place of Mega Freeze and hosted every Monday evening on the platform. Here too, the tournament began at 7:30pm last evening and came to an end a little over 6 hours later, at 1:43am this morning to be precise.

All in all, 376 entries each paid the buy-in of INR 2,200 and eventually, the top 31 places from them were paid out with the min-cash being set at INR 7,040. Coming out on top of the field was a PokerGuru Staking player Ashutosh Balodhi who plays on Spartan under the screen name ‘TeesMaarKhan’.

There were quite a few known Spartan Poker grinders finishing in the money and Balodhi outlasted them all to win the tournament and the top prize of INR 1,69,200. Some of those to bust early in the money included Amit Sur aka ‘Immortal killerr’ (25th), April 5For5 winner Wilson Yomso aka ‘RohiniSharma’ (20th), and Tathagata Sengupta aka ‘vegancannibal’ (13th).

As the tournament went deeper into the night, the competition only got tougher and the Final Table itself saw quite a few top names in contention including last month’s 5For5 winner Faiz Alam aka ‘DrStrange’ who finished 6th, Spartan TGIF winner Varun Gupta aka ‘iwillbluff’ who busted in 5th place, Ratul Steves aka ‘Atriohm’ (4th), Pranjal Gandhi aka ‘lilmessipranjal’ (3rd) and Ashish Ahuja aka ‘Spewushhhiiiii’ who lost to Balodhi in heads-up.

Ahuja had to settle for the runner-up prize of INR 1,13,920 after losing the heads-up battle. Ahuja was almost half the stack of his opponent when he decided to shove pre-flop with Ac 3d. However, his opponent had pocket Tens and wouldn’t have wasted too much time in making this call.

Eventually, the board ran out 6s Kd Qc 4d Js and Balodhi’s Tens were strong enough to win him the title. Gutshot contacted the player after the win and he said, “All credit goes to my magician coach, Aditya Agarwal. Thanks for keeping all of us motivated and not settle for anything less than perfect.”